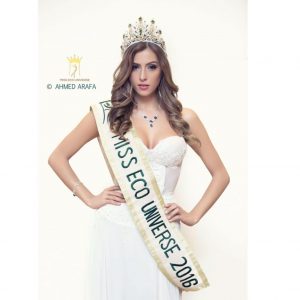 The finals of the second edition of Miss Eco Universe were held in front of the Pyramids. It was a magical evening in Cairo that evening.
Miss Eco Netherlands, Laura Ghobrial was one of the favorites for the crown as she placed in the top 10 of  several important prelims like: Eco Costume, Talent and Resort wear. The most impression she made at the talent competition where she showed the world her belly dance. She also placed at the top 10 and most believed she should have won this competition.
Laura made the top 16. For 12 Months of Beauty it was again a nice score at this pageant as Talisa Wolters became 1st runner-up at the first edition in 2015 of this new pageant.
It was Miss Costa Rica, Natalia Carvajal who took the crown with Miss Brazil, Lais Berte come in second place.