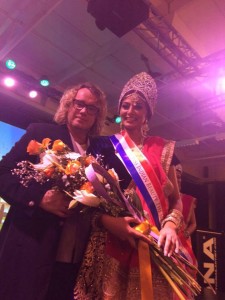 Miss Holland Now was present at the finals of Miss Indian Beauty the Netherlands 2015 which was held in De Broodfabriek in Rijswijk. Stefan was one of the judges who had not only to decide who would win but also who would win the Miss Talent award. Robin was one of the VIP guest of this beautifully organized event by Amjad Jahan and Seema Chedi of AJSC entertainment.
Although it was a last minute organized event (they just got the dutch license of Miss India Worldwide a few months ago), it was a spectaculair show with 13 stunning contestants. The pageant was hosted by Amjad Jahan and the lovely Miss India the Netherlands 2014, Janine Habib. special guests was the new ambassador of India to the Netherlands.
There were 5 rounds of competition: introductionvideo, western evening wear, talent, indian gala and they had to answer a question in dutch. The talent competition is as alway a very important segment of both the Miss India Worldwide pageant as the Miss Indian Beauty the Netherlands pageant. As usual we saw a lot of Bollywood dancing but also panfluit, singing and dancing with ribbons. The most unusual talent was the one of Zulaiga Habiboellah who did a chemical laboratory experiment on stage, whilst warning the audience of the danger of the experiment. After her demonstration the stage had to be cleaned by a special cleaning service wearing rubber gloves.
After that the top 5 was announced by the members of the jury. These 5 finalists had to answer a question in english.

The winner of the evening will represent the Netherlands at the Miss India Wordwide in Mumbai, India. But there were also 4 special awards:

For all the girls there were a lot of gifts and the top 3 received prices like: travels, jewelry, clothing and nails for a whole year. The winner of course wil also travel to India.

The members of the jury had the honor to announce the top 3:

Sousou was very happy and will travel to India very soon.

Our congratulations go not only to the winners, but also to the lovely organization….