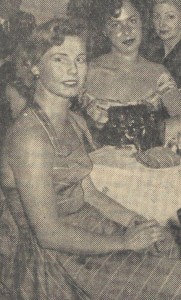 Conny was not the official winner of the Miss Holland 1954 pageant, she was first runner-up. The official winner, whose name is not known at this time, was not allowed by her boyfriend to show herself in a bathing-suit for an audience. During the finals of the Miss Holland pageant there was preliminary in swimsuit as she girls refused to go on stage in a bathing suit.
On the picture we see Conny during the Miss World pageant visiting a night-club in Vichy.