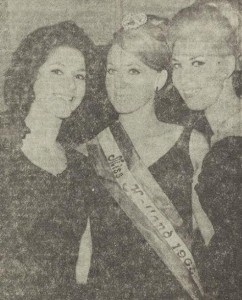 Anja Schuit won the Miss Holland 1965 twice in one day. The Miss Holland 1965 pageant was the setting of the Rudi Carrel show and during the show Anja won the crown but as there was no official jury the pageant had to be redone later that same day in a night club. But the results were the same as during the live tv show. Anja is also the first Miss Holland to be in the top 5 of the Miss Universe pageant. On the picture above from left to right: Elaine Bollen, Anja Schuit and Janny de Knegt