Beauty of the Past, Historical, Homepage 17 feb 2018
No comments 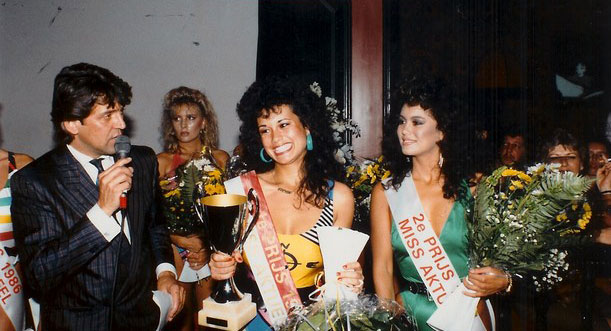 In the 80’s beauty pageants were quit populair in the Netherlands and the populair magazines also had their pageants, like: Miss Panorama and Miss Aktueel. Miss Aktueel was held 5 times and had several names like Miss Frivool, Miss Frivool Aktueel and Miss Aktueel.
In 1986 the pageant was a real big thing with a car as first prize. Also the candidates were a high level. Several girls had already participate in local pageants and 2 of them were even a finalist at Miss Holland in 1981 and 1985: Shirley Mescher and Bonita Baarda.
Shirley became famous in the Netherlands and beyond under the name Shirley Jane Mercier, a glamour model who posed for magazines like Playboy, Penthouse and many, many more magazines.
She tried also her luck as singer and sang solo but also in the group Music Hall. That group tried to represent the Netherlands at the Eurovision song contest in 1983. On the promotional pictures of the national song contest 1983, Shirley can be seen as a member of the group, but she was not on stage during the finals. What happened? A few weeks before she was replaced as she was pregnant. She gave birth to a lovely girl, Melissa. Melissa proved to be a lovely girl as she was crowned Miss Nederland 2007 and represented the Netherlands at the Miss World pageant.
Shirley had a hard time raising her daughter and participated in many pageants for the prize money. She always was a finalist and won also a lot of the pageants.

At the Miss Aktueel 1986 pageant she was placed first runner-up. Just before another beauty queen, Bonita Baarda, who ended 2rd runner-up.
Bonita was 3rd runner-up one year earlier at the Miss Holland pageant after she was asked to join as a finalist at the last moment as one of the other girls had left the pageant. Bonita was very happy with that placement. She was even more happy when the winner of the pageant was dethroned for posing nude and therefore she would be 2nd runner-up and that would gave her te opportunity to go abroad and represent the Netherlands at an international pageant.
But as she was at first not invited to be a participant at the Miss Holland pageant she had entered the Miss Panorama 1985 pageant and for that pageant she had posed topless and one small picture was published. She reported that immediately to the Miss Holland committee , but at first, they said that nothing was wrong with the small publication.
Bonita became very upset when she had to learn from an article in another magazine thats she was disqualified for posing topless.  At first she wanted to start a law suit but as Pasquale Somers, who was the dethroned Miss Holland 1985, had to be crowned again, Bonita, became 3th runner-up again, and she had nothing to win anymore. As revenge she posed completely nude for Aktueel magazine and she entered the Miss Aktueel 1986 pageant.
The lucky winner of the pageant was eventually Brenda van Steenveld. Although just 18, she also was already a veteran in the local beauty pageants. Being crowned Miss Beach 1986 and Miss Zomer (summer) 1986. After being crowned Miss Aktueel she tried her luck at several other beauty pageants and was seen nude in magazines like Penthouse, Playboy and the British Mayfair.
We wel probably will see these girls in more 80’s Saturday.