Beauty of the Past, Historical, Homepage 04 mrt 2018
No comments

This item is called Miss Holland PV. But what does that mean, PV? PV stand for Plaats Vervangend, in english: replacement.  When Angela Visser won Miss Universe 1989, she was no longer Miss Holland, as she would represent not only Miss Holland but all the countries of Miss Universe.
Because of that Angela was replaced by her runner-up Nandy Hendrikx.  Nandy was at the time of the Miss Holland 1988 pageant the one to beat, in fact the largest newspaper in the Netherlands “De Telegraaf” was already working on an article about her while she was not even crowned. 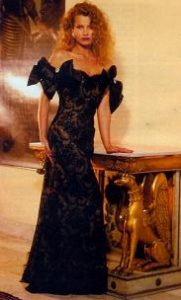