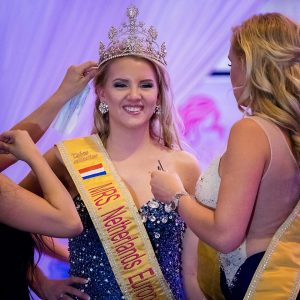 A few months ago, Claire Talsma won the title of Mrs Netherlands 2016, and now she’s going for the title of mrs Europe 2016.

“There is a whole program on the agenda”, says Claire, “One of the activities is visiting an orphanage.”
Claire is a mother of a 7 year old son and she likes to do that.
“Often the children have a little to no toys to play with, so I’ll take toys with me from the Netherlands to give to the children in the orphanage.”
“We also will be committed to women in Russia, who are victims of domestic violence.”, Claire says.
Mrs Netherlands already worked against domestic violence, by gathering clothes for women and children for one of the Blijf-van-mijn-lijf-huizen (Stay-off-my-body housing) in Rotterdam.
Besides supporting good causes, the women will also preparefor the finals.
Claire tells: “Of course it is a big challenge to compete with the most beautiful women from Europe, but I am proud that I may stand there in Russia.”
“It was an unforgettable experience to be crowned Mrs Netherlands Europe 2016.”
The finals will be on october 4th and then Mrs Europe 2016 will be revealed.