I was a Beauty Queen

In an old magazine called Rits, there were some nice articles about beauty queen in the 70’s and 80’s.

This is an article about Mariëtte Manuels, how was once Miss Callanstoog 1979 and also participated in Miss Holland 1979. The article was called, “I was a Beauty Queen”.

I was a beauty queen

“You are no more than a piece of meat, to be examined.” 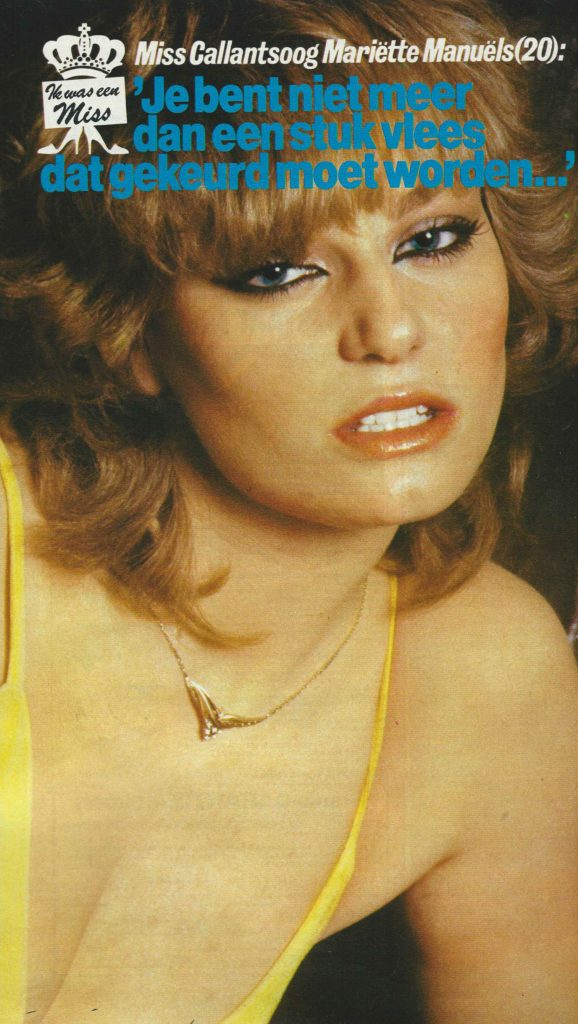 Miss Callantsoog, Mariëtte Manuels (20) is fed up with beauty pageants. There is only hate between the girls, she says in a bitter way.

They break the heals of each others shoes or they pour wine over a dress, just to make sure the another doesn’t win.
Of course I never did those things but the fun is gone.
Mariëtte, who is a sales woman, made sure she always participated together with some friends. When one is with some friends, you have fun. I participated in the Miss Holland pageant together with my friend, Eunice Bharatsing. She won, I became 5th runner-up. I didn’t mind that she won, my time will come another time, I thought. We always were together and didn’t care for the other girls. Some of the girls liked at us with different eyes and they thought that we were full of ourselves.
Mariëtte, who participated for the first time in a beauty pageant when she was 16, has to thank her mother for her succeses.: ”My mother always stimulated me”. At a pageants he always sits in the front row and enjoys it even more then I do. She also encourages my little sister Berthy to participate but she is only 12, and therefore a bit to young.
Although Mariëtte things that beauty pageants are no more then a meat inspection, she would love to participate together with Berthy; as long as I am not too old, she adds laughing.
Berthy still looks with a lot of expectation towards that world of glitters and glamour. She can’t wait until she is old enough. I can understand that. If somebody would have told me that those pageants aren’t that fun at all, I wouldn’t have believed them myself.
But what is it she really would like to do? Mariëtte comes up: “To walk fashion shows, thats what I like. I already did some shows: bridal shows but also some classical and couture shows form designer Guus Harms. Those shows are really swinging and one really has to do something, while at a beauty pageant you only have to look nice. Mariëtte, who loves to dress in fur and leather, looks very seriously when she says: “Thats why I don’t like being a photographic model. You only have to have a pretty face. You have to beg the photographers to please book you and keep up a big smile. No, not for me! You can earn some nice money, but to make it my profession: no, never!” 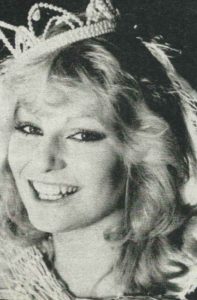 That she would think like that she never thought when she was discovered by a photographer at her 15. “I sat in a bus”, she told us laughing when thinking about this,”and when I got to my house, I noticed that I was being followed by a man. He approached me and told me that I was very photogenic. He was a photographer, so he knew what he was talking about. He asked me if I wanted to pose for him. Of course I loved it, what girl doesn’t dream to be discovered. But at that time I was much younger. Now I know more about the ways of the world.
Meanwhile I already participated in so many beauty pageants. Mariëtte, who describes herself as being romantic who loves soft-soul and classical music, hopes to have her own business one day. My boyfriend Sjaak, has his own company and I would love to have that too, for example a fashion boutique. I didn’t study sales not to become a buyer. Being a photographic model or fashion model you can only be for a few years. After that you’re face is too familiar and you become to old. It’s a carrier which does’t provide security. Although I would not recommend other girls to participate in a pageant, I did have a lot of fun. For example during the Miss Callantsoog pageant, we stayed for 3 days in a hotel. Eunice Bharatsing had to hand out the awards and we shared a room. We had to be in our room at 11:00 p.m. We didn’t feel like it, so Eunice and I went out to have some fun in the night life of Den Helder. We came back very early in the morning. Everybody had been looking for us while we had so much fun!
Mariëtte from The Hague clearly had it with beauty pageants, although she had a lot of fun. You are not more than a piece of meat that has to be examined. I know it sounds rude but that’s what it is. I think I have more to offer than a pretty face.

credits: Article and picture from Rits magazine
translation: Robin and Stefan from 12 Months of Beauty