I was a Beauty Queen

Beauty of the Past, Historical, Homepage 23 dec 2017
No comments

Part two of the series: ” I was a Beauty Queen” from the Rits magazines is about Dingena Andriesen. She became Miss Zeeland 1981 and that gave her a ticket to the Miss Holland pageant.
At the finals of the Miss Holland 1982 pageant she became 2nd runner-up. Like many girls today and back then, Dingena saw the pageant as a way to become a model.

This is the second article we publish from the magazine. But is in fact the first one from the series.

Did the dreams of former beauty queens come out? 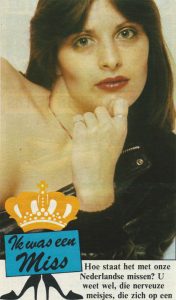 I was once a beauty queen

How is it with our dutch beauty queens? You know, those nervous girls, who let themselves be lured at somewhere in the country by some older men… The girls for whom a pageant title means a way to the world of glitter and glamour. Who drew of ever becoming MISS HOLLAND or MISS WORLD and often have a lot to spare to have a career. RITS visited some former beauty queens and asked them where they stand now. Have their dreams come true, or did the pageant leave a bitter taste?

This week the first one in the 20 year old Dingena Andriesen from Terneuzen.

She has the ideal figure to become Miss Holland this year. Her name is Dingena Andriesen. With a current sweet and innocent accent she says: I don’t believe in fairytales, but I want a career as a model… And: ‘One has to force success, thats why I participated in Miss Zeeland. And I won.”

She is tempting and self-confident, Miss Zeeland 1981, Dingena Andriesen. Her dark brown eyes pierce into the world. It looks like they’re saying: COME ON, I CAN TAKE YOU ON! But in her daily life she is not that though. Then, the 20 year old is a woman with a soft, almost Belgian accent, who loves to be accepted in the world of glitter and glamour, who dreams about a career as a photographic model in Antwerp or in Paris, or even in our own Amsterdam. With a soft voice she says to me: “ I just would like to model. I just try to get some work. At the moment I still work as a secretary. It is not that I don’t like my job, but..” Her voice stops as if she sees the white paradisal beaches in front of her…. Than: I just try to get some jobs. Unfortunately I am not registered at a modeling agency. Don’t you need a portfolio for that? That costs a lot of money, who makes good pictures for nothing?” Again she takes a break to think and then suddenly: “But I don’t believe in fairytales. I really don’t think that success just comes like that. One has to force success, thats why I participated in Miss Zeeland…. Well, I really didn’t want to but my boyfriend, fiancé did.”
In the far away town of Terneuzen it was indeed her boyfriend, Herman de Brock, who convinced Dingena to throw her body into the battle of Miss Zeeland. This title gives you automatically a ticket to enter the Miss Holland pageant. And Miss Holland travels abroad, gets assignments and the honur to call yourself the most beautiful woman of the Netherlands. Dingena Andriesen does want to enter the Miss Holland pageant this year. 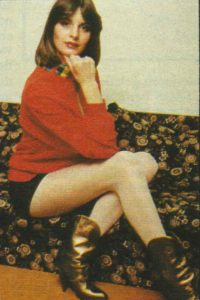 With her 1.79 and weight of 55 kilo, she doesn’t seem chanceless. Her measurements 90-60-90 also make her a strong contender. Only, Dingena fears the competition. Not because of the the physical qualities, but the jealousy that marks the course of every beauty pageant. She says to me: ”Even at the Miss Zeeland there was a lot of jealousy. The girls compete each other for life and death. On stage and in the dressing rooms. Fortunately I am not jealous by nature, but it was real hate and envy among each other. It changed constantly. One moment everybody friendly and I though: These girls are my friends, and the next there was a war again… To my own surprise, I won. My boyfriend Herman predicted it, but therefore he is my boyfriend, isn’t he?” She laughs exuberantly. “The prizes were beautiful. I won a watch and a dinner at a very fancy restaurant. Besides that I won a lot of gift cards but you really had to do something for them. At first we had to parade in front of the jury in clothes that we picked out ourselves. You feel really looked at, because it is off course a viewing game for the audience. They just judge you on how you look. The curves you have, just your whole body… Especially the second round I was very nervous. Wearing only a bikini on stage. If one is prudish or not, it is a real sensation… But when you are called out as the winner, that doesn’t matter anymore. Because only winning count’s, doesn’t it?”
By the way, It was not the first time Dingena Andriessen was declared the winner of the beauty pageant. She laughs when she says: ‘No, you are right, but the first time has been a long time ago. I was around 13 years old when I was with my parents on a holiday in Spain. There I won a pageant in a discotheque. But that is such a long time ago, I really don’t remember a lot of it. Let the past be in the past, I have to think about my future. For the future I am at the right spot here in Zeeland. I am very close to Antwerp, Gent or Paris. And of course Paris is the centre of fashion…”
For now Dingena will still live in Terneuzen. Paris is just for holidays right now. That portfolio, hè. First I really need that. Because if I don’t have that, I can forget a career as a model.”
Maybe the Miss Holland pageant from this year, will bring the solution and maybe Dingena will get the career she hopes for. Maybe the beautiful pictures made by RITS photographer Hans Toonen will also help her on her way to that future…