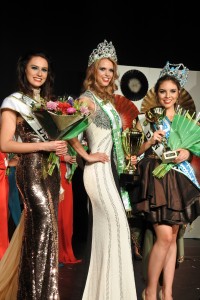 In a show full of entertainment at the World Fashion Center in Amsterdam, Marlouk Bouman was crowned the first Miss Avantgarde.
Marlouk represented the city of Utrecht at the pageant. All the girls who competed represented a city in the Netherlands.
Miss Beauty Avantgarde (second place) became Gioverllys Rashell Rodríguez, who represented The Hague. The first runner-up (third place) was Miss Leiden, Judith De Wilde de Ligny.
During the show there were many special awards and manny were won by Miss The Hague, Gioverllys Rashell Rodríguez.

Besides a beauty pageant there was also a competition for the best ECO costume and another for the best evening gown. All the girls had their own fashion designer and showed the beautiful designs at the show.
It was Rita Harnam (FashCrash by Lolita) who won both categories. Miss Leiden was the lucky girl to be wearing the creations.

Robin and Stefan of Miss Holland Now both were judges as was Miss Grand Netherlands 2015, Shauny Bult.

We would like to congratulate Vicky Zimmerman and David Cardenas who did a great job organizing this spectaculair event.