Men of the Year Netherlands 2017 is Levi Kasanrokyat 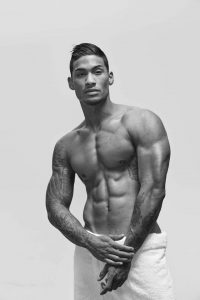 Man of the Year Netherlands 2017 is 27 year old Aryon Levi Kasanrokyat from Lemmer.
He is currently working in a male fashion shop besides his modeling and dancing career. This handsome man with Indonesian/Javanese descent also does a lot of television work. He will represent the Netherlands at The Man of the Year pageant, next summer.
In 2015 he was a contestant for mister International Netherlands but had to leave early because of a his busy schedule.This year he was one of the contestants of the most handsome towel model for Etos. (see picture)
Robin and Stefan of 12 Months of Beauty already noticed him back in 2015 and asked him this year to represent the Netherlands at the second edition of Man of the Year.