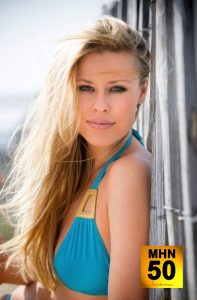 Here we have the tenth nominee for the MHN50.
A real celebratie nowadays is Celine Huijsmans. She is one of the hosts and reporter for SBS6 Shownieuws on dutch television. Her career started already when she was 19 when she hosted some call games on television and SBS Games.
She won the AXE Model contest and she was the face of “Sensation White”  in 2007.
In 2009 she entered the Miss Universe Netherlands pageant and she was a real favorite among the fans. Although she didn’t make the cut, she already knew that her real goals for life where to become a star, and so far so good.