Miss and Mister 12 Months of Beauty 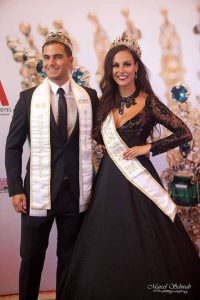 During a spectacular event in the Apollo Hotel/Harbour Club Vinkeveen last sunday, Kimberley Xhofleer and Ennio Fafieanie were crowned Miss and Mister 12 Months of Beauty. Both will represent the Netherlands at one of the grand slam pageants this year.
Kimberley, 23 from Ysselsteyn, will represent the Netherlands at the Miss Grand International pageant in oktober in Myanmar. Miss Grand is one of the fastest growing pageants in the world and will be held for the 6th time. Robin and Stefan from 12 Months of Beauty have been responsible for all the dutch representatives so far.
Kimberley was crowned by the beautiful Kelly van den Dungen, who was one of the favorites to win the international pageant and became one of the semi-finalists during the fabulous finals last year in Vietnam.
The lovely and radiant Kimberley was so happy to win this prestigious title. In 2016 she was Miss Beauty of the Netherlands and she reprinted our country at the Miss Tourism Metropolitan 2016, where she made the top 10 and won the Miss Talent award. She was also at the Miss Brilliancy in 2017.
With this beauty, the Netherlands have once again a very strong contender in the Miss Grand International pageant.
Mister 12 Months of Beauty 2018 is Ennio Fafieanie. Ennio, 20 years from the very small village of Valthermond wil represent the Netherlands at the third Mister Supranational in december in Polen.
Ennio was very surprised to win this pageant as this was his first pageant ever. He was scouted by Demy, his girlfriend who was one the 10 finalists at the Miss 12 Months of Beauty 2018. Ennio was crowned by Mister Supranational 2017, top 20 finalist, Ferdi Caglayan. Also in the audience was Mister Supranational Netherlands 2016, Rico Mallee.
Already a favorite among the international fans of mister Supranational, Ennio will go for gold.