Absolutely a great show organized by Kim Kötter and Monica van Ee-Hummen. Thats just the start of this article. Everybody in the audience felt the energy from the start till the end. And even if you did not have a daughter or a friend who participated you would be excited to find out who would be Miss Nederland 2016.
Who would be able to step into the footsteps of Jessie Jazz Vuijk, who was such a great Miss Nederland 2015. She graced all the magazines and is currently in the populair tv show “Expedition Robinson”. 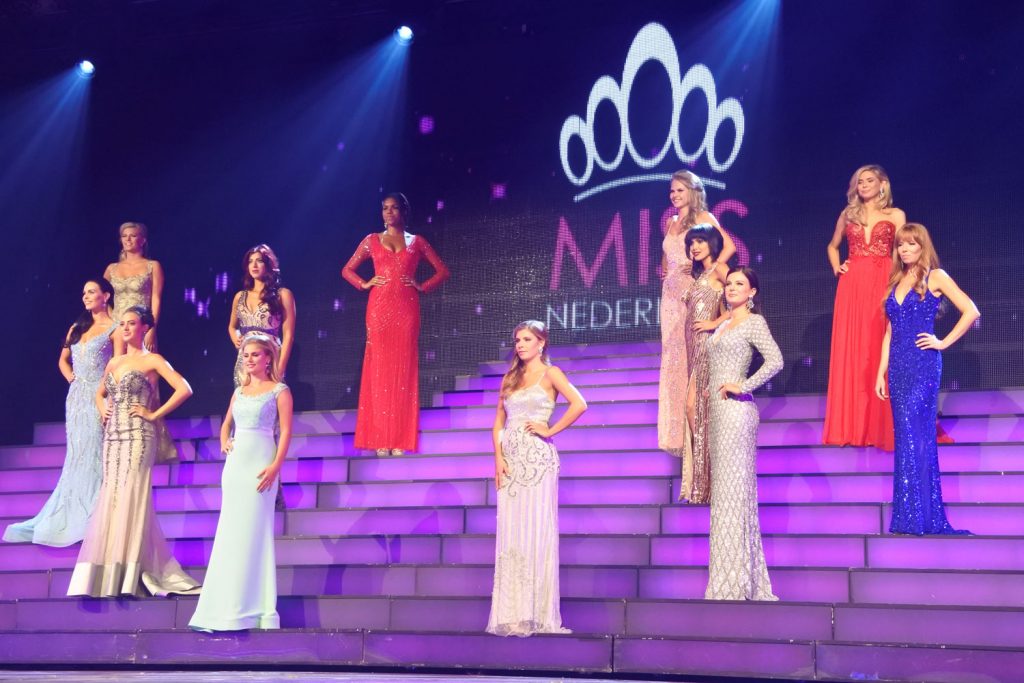 Twelve beautiful girls all hoping to be crowned with the radiant crown designed by BaroQco Jewels. The judges would have a hard task finding that one girl.
Seated in the jury were: 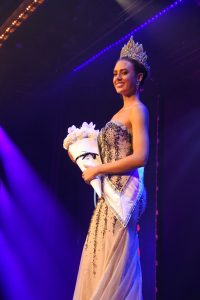 There were three rounds of competition. The first one was a short interview with the host of the evening, Victor Brand. The little chats showed that some of the girls were quite nervous. We were surprised by some of the girls who were competing in their first pageant ever and how they answered the questions with a lot of attitude. Because the girls were wearing no high heals we noticed that the girls were mostly not very tall.
The second part of the show was a talent competition. But this part was not a part of the over all competition but at the end of the evening there would be a special talent award awarded to one of the girls. Not all the girls participated in this competition. The 8 beauty queen that did participate showed us some dancing, singing, playing an instrument, boxing and public speaking.
We from Miss Holland Now were very impressed by the singing of Djerra. She showed a very mature side of herself and she was very confident. Also the energetic dance of Emily was appreciated by us and showed her professionalism.
We were very enthusiastic of the fashion show where the girls showed clothes from “Given”. This was according to us the most dynamic and fun part of the show and we saw the girls shining and having fun on the catwalk. They smiled tho while time.
After the break it was time for the great singer Elize, who accompanied the girls during the swimwear competition in which the girls wore identical black swimsuits and pearls.  We hope the judges had enough time to see all the girls as they did not wear their sashes and did not step out individually. This part was also dynamic and full of energy but for the people far away a little difficult to see who was who. 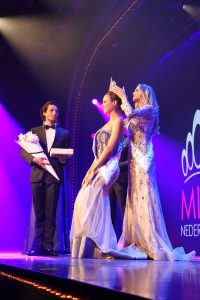 The last round of competition was the evening gown wear and after this round it was time for the judges to leave and make their final verdict.
Everybody was looking forward to the results. Would it be a girl with a lot of beauty pageant experience or would it be a newcomer? In the polls everywhere around the world we saw that some of the names were mentioned a lot: Would it be tall, intelligent and pageant experienced Shauny Bult, or the very  flexible and always smiling, experienced Kelly van den Dungen, or fresh and talented Zoey Ivory or would it be blond, happy and shiny Denise Swier?
But before the crowning, the special awards were awarded to some of the girls. Lucky Emily won two of the awards: Most Talented and Miss Congeniality. Miss Social Media was won by Shauny Bult and Miss Populair was won by Michelle van Sonsbeek. The sashes that go with the awards were brought on stage by Miss World Netherlands 2015, Margot Hanekamp.
But now it is time for the moment of truth. Wo would be Miss Nederland 2016? First the top 3 was called out: Kelly, Zoey and Denise. As there is only a top 3, some of the favorites didn’t make it the last cut.
Kim would now first call out the 1st runner-up: Denise Swier. The last two girls were standing in front of the stage.
And Miss Nederland is…. Zoey Ivory. Jessie Jazz crowned the new Miss Nederland and Zoey took the stage for her first walk as the new Miss Nederland.
It was and evening full of entertainment and suspense. We have to congratulate the Miss Nederland organization, Zoey and the other 11 for a job well done.