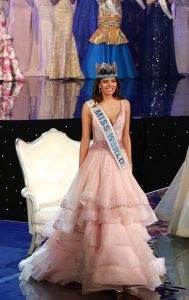 For the second time Miss Puerto Rico wins Miss World. It is the lovely Stefania del Valle who was crowned yesterday by Mireia Lalaguna from Spain who won the crown last year. We have to go back 31 years in time when Welnelia Merced won the Miss World title and also in 1975 it was a bid of a surprise.
The dutch participant, Rachelle Reijnders, who was prepared in a very short time by Katia Maes, unfortunately didn’t place.
Like the national directors before Katia, her first one didn’t make the cut. When Hans Konings took over the franchise in 1989, his first participant, Liesbeth Caspers didn’t place. The same happend in 2008, when a modeling agency took over for one year, Carmen Kool was not among the semi-finalists. In 2009, when Kim Kötter got the dutch license for Miss World, Avalon Chanel Weijzig also was unplaced. But for Hans en Kim their second entry both made the first cut. So we hope for Katia the same will happen in 2017.
Rachelle Reijnders did a great job as she had a very short time to prepare but she staid focussed from the moment she was crowned Miss World Netherlands 2016. We are sure she will have memories to last a life time.