The modern Miss Universe pageant started in 1952 in Miami Beach, Florida. The Netherlands didn’t participate in the first 4 pageants but started to participate in 1956. We will look back to all those beautiful dutch girls who had the honor to represent our country in the most covered beauty pageant in the world.
After the big succes of Angela Visser in 1989 it was possible again to see beauty pageants live on television in the Netherlands. The Miss Netherlands Universe pageant was broadcasted first by Veronica for 4 years and in 1998 once by SBS6. But it was also the decade with 2 years of absence of dutch beauty in the Miss Universe pageant. 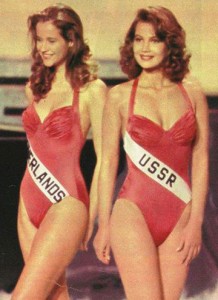 In 1991, Veronica started their 4 years of live broadcasting the Miss Netherlands Universe pageant. There were 12 girls representing the 12 provinces of the Netherlands. Two of the favorites were Miss Brabant, Diana Gruyters and Miss Noord Holland, Christina Willemzorg. Christina was already a finalist at the Miss Nederland 1990 pageant.
The two favorites could not impress the jury enough as Miss Utrecht, the tall Paulien Huizinga, won the first Miss Universe Netherlands crown and would represent the Netherlands at the Miss Universe 1991 pageant in Las Vegas, USA.
One of the hot favorites for the Miss Universe crown was Miss USSR, Yulia Lemigova. The Miss USSR pageant was owned by 23 years old dutch businessman Steven Rottier at that time.
Paulien was never a hot favorite for the crown but managed to get into the semi-finals. There she started to gain more and more fans in the audience as she answered the questions at the interview round  in a very funny and spontaneous way.
Miss Huizinga was great in all her interviews and became 1st runner-up in the end. Miss Mexico, Lupita Jones, became the first Miss Universe from her country.
Paulien started a television career in the Netherlands after she crowned Miss Universe Netherlands 1992. 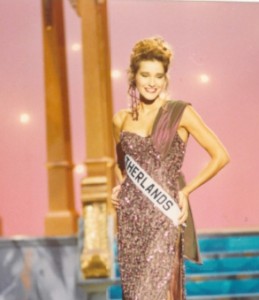 Vivian Jansen, Miss Brabant Universe 1992 was one of the favorites for the Miss Universe Netherlands 1992 crown. So there was no surprise when she was crowned by Paulien Huizinga. Of course, Vivian had some hard acts to follow. Angela who won in 1989 and Paulien who was first runner-up in 1991.
The Miss Universe pageant 1992 pageant was held in Bangkok, Thailand. Miss Netherlands was one of the strongest contenders and many believed in a second crown for the Netherlands. The group of favorites included Miss Belgium, Miss Iceland, Miss India, Miss Namibia and Miss Venezuela.
Vivian became one of the semi-finalists and started very strong with a third place in the swimsuit competition. There was no surprise when her name was called as one of the top 6 finalists. Many believe that this is one of the best group of finalists ever. Unfortunately Vivian did not make the top 3. Miss Namibia was crowned as Miss Universe 1992. 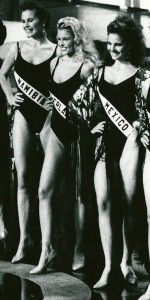 When Angelique van Zalen won the Miss Universe Netherlands crown, the Netherlands was a country to watch in the world of beauty pageants after the successes of the years before. Angelique went to Mexico City in Mexico where the finals of the Miss Universe 1993 pageant took place. Like the years before, Miss Netherlands had a lot of fans who believed that Angelique would make the semi-finals. Many thought that Angelique had lot of resemblance with Miss Universe 1989, Angela Visser.
Competing for the crown were Miss Brazil, Miss USA, Miss Colombia and Angelique her roommate Miss Australia. When the semi-finalists were called, Angelique was left out. She was very close however, she finished as 15th just 0,160 points behind the number 10, Miss Czech Republic. It was Miss Puerto Rico who was the surprise of the evening when she won the crown. 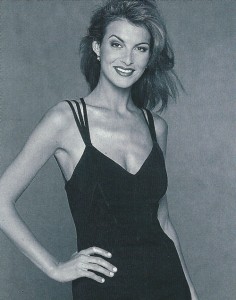 The Miss Universe Netherlands organization took over the franchise of the Miss Holland organization and therefore had the right to name their winner, Miss Holland again. They also had the right to sent girls to all important international pageants except to Miss World.
Because of that and some other reasons they changed the format for the broadcast on television. Instead of calling just the winner, there was a top 3. It was a very strong group with 12 beautiful provincial misses. The 3 finalists were: Miss Noord Holland, Sabine te Vrede, Miss Overijssel, Natascha Louwen and Miss Zuid Holland, Irene van der Laar. Irene van der Laar was already a successful model in the Netherlands who had graced many covers of magazines.
Irene van der Laar won and went to the Miss Universe pageant in Manila, the Philippines.  She was one of the tallest contestants in the competition. There were many favorites for the crown. Miss Belgium was probably one of the real top favorites but failed, just as Irene did, to make the top 10.
Miss India, Sushmita Sen was crowned Miss Universe 1994.
Irene van der Laar started a successful tv career in the Netherlands after her reign. 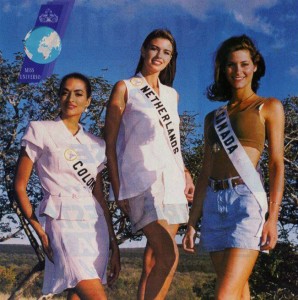 The Miss Holland pageant was not longer broadcasted, after 4 years of broadcasting. In 1995 and 1996 the organization worked together with the biggest newspaper in the Netherlands, “de Telegraaf”, like in 1967 and 1968. There were 8 girls who were selected as finalists and a jury chose, without any show, Chantal van Woensel as Miss Holland 1995. Chantal traveled all the way to Windhoek in Namibia, to represent the Netherlands at the Miss Universe 1995 pageant. There were many who believed that Chantal would make the semi-finals but she missed it and became 22nd in a group of 82 girls. It was a pageant with many surprises as many of pre-favorite girls did not make the cut. From the pre-favorites who made the cut, Miss Colombia, Miss Puerto Rico an Miss Canada only Lana Buchburger from Canada made it to the top 3 and placed as 2nd runner-up. Miss USA, Chelsi Smith was surprisingly crowned Miss Universe 1995.
Chantal started a relation with the famous dutch soccer player, Marc Overmars, and is still the only dutch beauty queen with her own postal stamp. 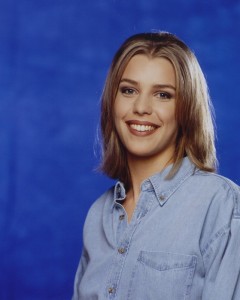 There were 12 girls selected as finalists for the Miss Holland 1996 pageant. All the girls were introduced in the “de Telegraaf” and the readers of the newspaper could vote for their favorite. It was blond Marja de Graaf who won the crown and the right to represent the Netherlands at the Miss Universe pageant in Las Vegas, USA. It was the first year Donald Trump was involved in the pageant. His wife at that time, Marla Maples Trump, was co-host of the pageant in 1996 and 1997. Rumors say that he got involved to give his wife a toy. After the two divorced, he kept the toy.
Marja did not make the semi-finals as did not the big favorite, Miss France, who ended 11th.
The later very controversial Miss Venezuela, Alicia Machado, won the 4th Miss Universe crown for her country. When she gained a lot of weight during her resign she was almost dethroned. Later she would pose for male magazines like Playboy

Miss Universe Netherlands was back on tv. The new dutch commercial broadcaster SBS6 got the right to broadcast the event. There were 9 girls who were selected as finalists. Some of them had already  experience in other national and even international pageants.
Jacqueline Rotteveel who won the pageant had already a successful career as a model. In 1995 she was first runner-up at the “Supermodel of the Netherlands” competition. A preliminary for “Ford’s Supermodel of the World”.
She represented the Netherlands at the Miss Universe pageant in Honolulu, USA. She stood out as she didn’t have long hair and many called her the face of the pageant. Miss Universe 1998 was a pageant with many strong contenders and any of them could make the semi-finals. Beauty pageants started to become less popular in Western Europe and more and more popular in the latin and asian countries. This can be seen in the semi-finals where the european girls used to have the force majeur but in this decade start to loose that.
Jacqueline did not place for the semi-finals. Miss Trinidad and Tobago, Wendy Witzwilliam won the pageant.