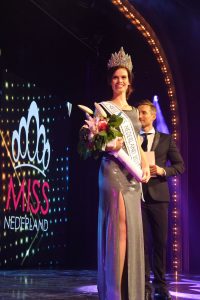 After a 3 hours show in Studio 21 Nicky Ophey was crowned Miss Nederland 2017. She will now represent the Netherlands at the Miss Universe pageant later this year in Las Vegas.
For Nicky it was a dream come true, even more because just 3 years ago she won Holland’s next Topmodel. So all competitions she enters, she wins…..
Although the competition started with 12 finalists 4 months ago, yesterday only 11 gils were presented on stage. But still it was a hard job for the judges to chose from these diverse group of girls.
The show started with Zoey Ivory, who danced on “Single Lady”, the song that made her an instant hit on youtube when she danced during a break at the finals of Miss Universe 2016. With this opening, she proved that she was the rightful winner of the RTL4 program ” Dance, dance, dance”. The show she just won 2 days before the Miss Nederland finals.
After the opening we met with the to host, the CEO of Miss Nederland, Kim Kotter, who was crowned 15 years ago as Miss Universe Netherlands and Koos van Plateringen.
The girls had to show themselves in several rounds like fashion, swimwear and evening gowns.
There were also 3 other titles to win: Miss Congeniality, Miss Social Media and Miss Talent. The last two were both won by Ireda and Miss Congeniality was Farrieda.
After the announcement of the special awards there were two girls asked to take a step forward as one of them would be first runner-up and one would be crowned Miss Nederland 2017. The two were Farrieda Smit and Nicky Ophey. In the end it was Nicky who was crowned by Zoey Ivory, Miss Nederland 2016.