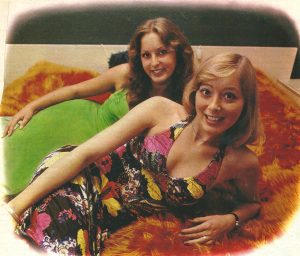 Two lovely girls who also happen to be both a beauty queen: Lynda Snippe and Marjolein Snippe. This is an article from “Weekend” magazine from october 1975. Lynda was at the time of this article Miss Holland 1975 and had been to the Miss Universe pageant.
Both entered a lot of pageants in the Netherland. Marjolein stated: “I do it for the prizes.”. Sometimes it happened that both girls entered the same pageant: Marjolein won the Miss Kaag pageant while Lynda was 2nd runner-up.
During the Miss Zandvoort 1975 pageant Lynda, who was off course Miss Holland 1975, was one the judges and Marjolein was not just a participant but she also won. At first Lynda would crown the winner of that pageant but she already had agreed with the organization that if her sister would win someone else would crown  the newly Miss Zandvoort. One of the reporters wrote that Lynda was jealous at the sister, but the sisters both stated that nothing like that was true and according to the pictures we can say that they are right.