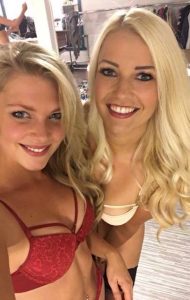 These two lovely ladies met for the first time during the Miss Overijssel 2012 pageant. Charina Bartels (left) and Talisa Wolters (right).
The two started their beauty queen careers at that pageant. Carina won the Miss Overijssel 2012 pageant and represented her province at the Miss Nederland 2012 pageant. In 2014 she became Queen of the Netherlands, a pageant where Talisa was also a finalist.
In that same year Charina went to Malaysia to represent the Netherlands at the Miss Tourism International pageant where she became a finalist and won the Miss Tourism Global title.
Talisa won the first Miss Grand Netherlands crown in 2013 and went on to become a semi-finalist at the Miss Grand International 2013 pageant. In 2014 she represented the Netherlands at the Miss Earth pageant and in 2015 she became 1st runner-up at the first ever held Miss ECO pageant.
The two met again at an fashion show for Marlies Dekkers.