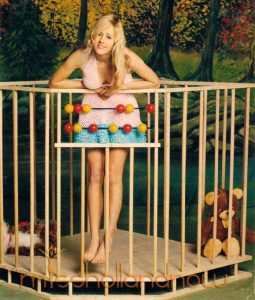 Miss World Netherlands 2017 has started. We will introduce the finalists soon on Miss Holland Now. Katia Maes is working very hard and she also has the time of her life preparing the girls for the national finals in july.
For the Pic of the Week, we will show you some unusual pictures of girls that have represented the Netherlands at the Miss World pageant.
We start with Monique Borgeld. She represented our country at the Miss World 1972 pageant.
Although she never won the Miss Holland pageant she entered the pageant two times in 1972 and in 1973. Monique did not only go to the Miss World pageant, she also went to the Miss Universe pageant in 1973. At both pageants she was unplaced. Monique is the typical blond girl, many would expect to represent the Netherlands at beauty pageant, not only in those days but still there are people who think that way. But as we know the Netherlands is multicultural society nowadays.
The picture we show here is has been published in the Panorama magazine from the early 70’s. It was an article about the beauty queen, Monique Borgeld. Panorama is a magazine that was famous for its unusual pictures in those day. In this particular photo, we see Monique in childs box.