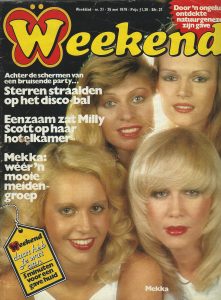 On the cover of this Magazine (Weekend from 1979) we see 4 lovely girls who are together the girl group Mekka. In the 70’s there were several girl groups like LUV and the Internationals who scored some hits in the Netherlands.
On the left under we see Barbara Ann Neefs, who participated in many beauty pageant. She was 2nd runner-up at the Miss Holland 1975 pageant and one year later she was 3rd runner-up. She also participated in the 1975 Miss World pageant and she won the Miss Europa 1978 pageant.
Mekka was not a big succes they produced two singels in 1978: “I love you” and “Dance on”.
Barbara told the magazine that she was very happy to be asked for Mekka. She already had been the host for a television program called  ” Disco Circus” at that time.