The summer is the season where everybody goes outdoors.
It is also the season when many smaller pageants are held in hotels, beach clubs and at events.
Whit this summer column, we like to highlight some of these pageants from the past and from the present. 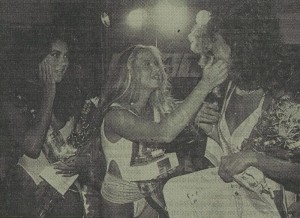 Jan van Geloven, director of the Beauty Pageant in the crowded Carlton: For 4 years now I organize the beauty pageant in Scheveningen. It has become a big succes. Others probably like to copy that. If I wanted to, I could do something against that; what they do is illegal. I am registered as the organizer of this pageant. Somebody else cannot come in between.
But Jan is not making such a big deal of it: You can not compare the two pageants: what I do, has class, with a classy audience. Where else can you see 250 people  in smoking, over 20 minutes of firework and a huge buffet.
Mr A. Vienne jr. of Apart Design Holland, who had 11 participants walking in Beach Club The Twins, says: We have crowned a new Miss Beach with an enormous public attention. Tess Kambanda is not Miss Scheveningen but Miss Beach Scheveningen. So, fashionable Scheveningen exists in two parts now: The Beach and the other part of what once was a sleepy village. The Miss Beach organizer says: It has been a coincidence that the two pageants were held in 1 weekend. If  I would have known, I would have kept that in mind.

It was as if the Gods of the weather knew about the “illegal” Miss Beach. After the crowd and the guests had admired the girls, it started to storm. It was as if Jan Geloven himself threw lightning at the Beach. To save the hairdo of the girls the pageant had to continue inside. At 9am Tess Kambanda, born in Rwanda, was crowned Miss Beach. She and 5 other girls have won a ski holiday. Miss Scheveningen, the 18 year old Angelique Tates from Krimpen aan de IJssel, got a car. Jan: There has to be a difference………

(on the picture in the article we see Miss Scheveningen, Angelique Tates in the middle. On the left we see Shirley Messcher, and on the right Mandy Jacobs) 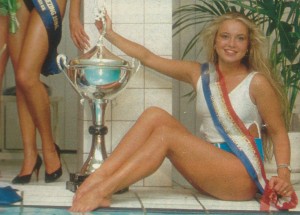 At the time of the Miss Scheveningen pageant Mandy was Miss Holland 1985. She became Miss Holland 1985 after a judge decided that the winner of Miss Holland 1985, Pasquale Somers, had to give back her crown because of several incidents. Mandy represented the Netherlands at the Miss Europa 1985 pageant.

Shirley was a popular glamour model from the 80’s. She was 4th runner-up at the Miss Holland 1981 pageant. After that she participated and won many other national pageants, like Miss Beach Zandvoort, Miss Amsterdam and Miss Grand Prix.  She posed for national and international magazines like Playboy, Newlook, Penthouse and Aktueel. After that she tried her luck as a singer in duos but also solo. She was known by the name Shirley-Jane Mercier.
In 2007 her daughter, Melissa Sneekes became Miss Nederland and respresented the Netherlands at the Miss World 2007 pageant. 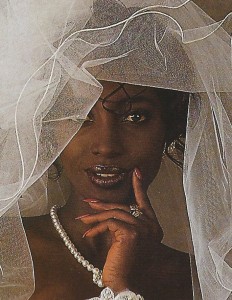 Tessa Kambanda was born in 1959 in Rwanda and belonged to the royal family  of the Watutsi. In 1961 the family had to fled the country because of the civil war between the Watutsi and the Wahutu. After that they lived in Zaïre and when Tess  was 7 they moved to Uganda. In 1978 a sister of Tess asked her to come to the Netherlands as she was married to a dutch man.
After her Miss Beach Scheveningen year she started to pose for magazines like Playboy and Aktueel.