They made it, Part 11: Anja Schuit 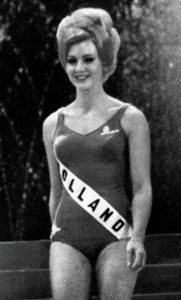 Anja Schuit from Amsterdam was chosen as Miss Holland twice. First at a television show, but as there was no official jury, the results were not official. The same evening as the television show Anja was crowned again after a pageant in the International Congress Centre.
Miss Holland first went to the Miss Europe pageant, where she was unplaced. Before Anja went to the Miss Universe pageant, she traveled together with some other beauty queens to Rio de Janeiro to compete in a beauty pageant in honor of the 400 years Rio celebrations. Miss USA won that pageant and together with the other international girls, Anja flew to Miami Beach for the Miss Universe pageant.
Anja was one of the many blond favorites to win the Miss Universe crown. She was considered one of the most intelligent beauty queens in the pageant. It was no surprise when she was one of the top 15 finalists. For the Netherlands, Anja is the second girl to become a semi-finalist. But she even managed to become a top 5 finalist and is the first Miss Holland to become a finalist in the Miss Universe pageant. It was Miss Thailand, the only brunette in the top 5, who won the pageant and Anja became 4th runner-up.
After the pageant she was even more successful as a model in the Netherlands but also abroad.