Who will she be? There are 8 just incredible woman who participate in te pageant. We will introduce them to you one by one, almost there: 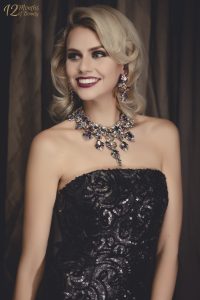 Melissa Oeges entered the world of beauty pageants by filling in the form for Miss Grand Netherlands 2017.  She is no stranger to beauty though, as she is a beautician and a makeup artist.
Although Melissa does’t have as much experience as some of the other participants, she seems to do great and manage to be on top of the pageant. We see that she is eager to learn from every moment in the pageant. The blond has a classical beauty queen look.
Melissa her ambition is to build up a beauty salon where people are not just getting treated to become more beautiful from the outside but also from the inside. It would be great to help those who have had a bad time and lost themselves to accompany them to feel better and more beautiful.
I would like to show the world that it OK, to be yourself. You do not need to hide behind the perfect pictures of instagram or snapchat; “You can rol in the mud at a crazy festival!”.