We are very proud to ask Nancy 10 questions…. 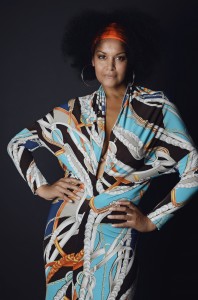 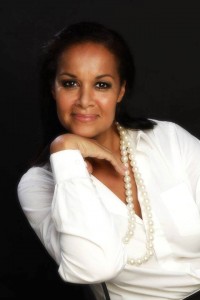 Tell us about Nancy before she was Miss Holland 1984…

I was already working as a model for 3 years. I did shows for all the big designers in the Netherlands, besides that I was a lot in Belgium and Germany for shows, and once in a while I did a photoshoot. Photoshoots were more difficult for black models, because they thought that it was not profitable. Now and then I also went to Paris or Milan for a few weeks for modeling jobs.

In 1984 you decided to enter the Miss Holland pageant, why?

It was not a conscious decision to become a beauty queen. I was asked to participate together with some other models. It was the period of feminism so participating in a beauty pageant was actually not done. At that moment it was a bit quiet for modeling and it seemed fun to enter with some colleagues. Especially when I heard that there were dance numbers in the pageant. With my background as a dancer for television it was an easy step to make.

What is the most memorable moment of the Miss Holland 1984 pageant and why? Was it all what you expected it to be?

When I won, was crowned and my mother entered the stage. She was crying behind the photographers and couldn’t get through. When I saw her walking away, I followed her and embraced her. This was photographed and the next day it was on the cover of the Dutch newspaper Het Parool. 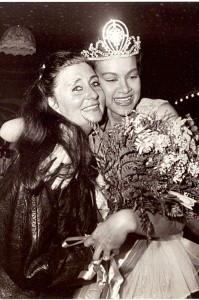 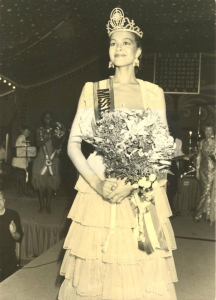 You were the first black Miss Holland and that was big in the news in 1984, how did this effect your reign and how did that make you feel as it was all about your color and not about you as a person?

Even as a little girl I was judged because of the color of my skin. So sadly this was nothing new to me. I know there are people in the Netherlands who thought that I shouldn’t have won. Abroad I just stood out more. They looked at me an extra time. I got a lot of interviews, especially in the United States during the Miss Universe pageant. In 1983 Vanessa Williams became the first black Miss America, so there was a lot to do about that there. At Miss BeNeLux I became second; the father of the winner came to me after the show and told me that I should have won. He was not the only one who came to tell me that. Unfortunately they could not look further than the color of my skin in Luxemburg.

Do you think that you made a difference for young girls and maybe men because you were the first beauty queen of color in the Netherlands?

I didn’t realize the impact this had then. Later a black actress told me: „Do you know how important it was for us, black young people, to see you win. It gave us the feeling that because of you, doors were opening for us.” Those were beautiful words which touched me deeply.

You participated in many international pageants as Miss Holland, tell us about your experiences during the pageants.

The Miss Universe was my first international pageant, which was not a good choice, because this was the most important pageant. It is better to gain some experience in other pageants first. It was also the hardest work to do. Besides that we were pampered a lot. We were taken to the most beautiful places in Miami, where the pageant was held then. I got a lot of requests for interviews, to which my chaperonne escorted me. I got flowers and presents from strangers who saw me on television. The pageant was huge and impressive. I enjoyed this pageant the most. I’m still in contact with several beauties from the Miss Universe pageant, which is great because we shared something you cannot share in the same way with other people. The Miss World pageant was next, this was in London. Again it was a lot of fun. We were taken to musicals, beautiful restaurants etc. Totally different than in the States. At the Miss World pageant one of the judges was designer Oleg Cassini. He came to me after the show to tell me that he wanted me to model for him in New York. I did this for about 10 years. I flew from Amsterdam to New York and back frequently. It was a wonderful time. My last pageant was Miss BeNeLux, which was a small pageant. you cannot compare this to the other pageants. It was a pity that they couldn’t look passed my skin color. 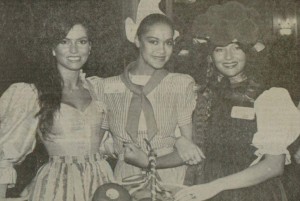 Tell us about Nancy after she was Miss Holland 1984…..

I continued modeling. I was 2 to 3 months in New York and came back for 1 to 2 months. This traveling I did until my early 30s. I wanted a child very badly. On my 33rd I got a beautiful daughter. Knowing that I was at the end of my modeling career, I did several studies in the Netherlands and also abroad and I became a yoga instructor. I already teach for 10 years now, with a passion. And once in a while I still do some modeling.

What advise will you give to the young girls who want to be a beauty queen today? And would you stimulate you’re daughter if she would like to be a model or a beauty queen?

I advise girls to present themselves as good as possible. Nowadays you can find a lot on the internet. Make sure your behavior and your appearance are top class, because you are looked at the whole time. It is very important that the person who’s managing you, handles your business in the best way. If they manage you well, you can get lots of assignments out of it. Network, network, network… Keep in touch through social media with the people from the pageants you have been in. Be sure you leave behind a great impression.

Are there things you have learned during your reign, that you did/will take with you for the rest of your life?

Stay true to yourself. Everybody has an opinion of you. From great to nothing. Don’t believe either way. You know you look great otherwise you were not chosen. Keep looking at yourself, to your pros and cons. What can you work on to become a better person. For yourself and the people around you. And keep on dreaming, dreams do come true. 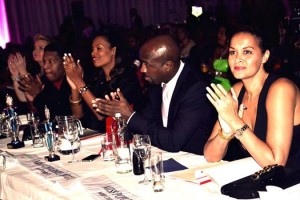 If you were a judge in a beauty pageant today. What quality(s) woud you look for in a girl and why?

At a pageant you first look at the beauty, but besides beauty, appearance is even more important. I like a powerful appearance. And at an interview I listen to the goodness in their heart. Personally I would not choose a beautiful girl with a bad character. And very important…be fluid when you speak during an interview. There’s nothing worse than a person struggling with their words on stage And on stage you should be able to walk on high heels. Everything that did go well is pushed aside as soon as you can’t walk on a stage. I want to see that some one really wants it and is well prepared.

Thanks Nancy for the time and for your support always…..