Beauty of the Past, Historical, Homepage 10 feb 2018
No comments 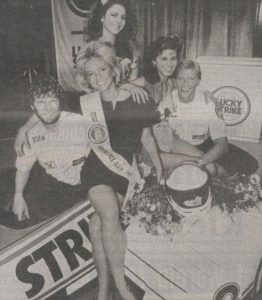 The TT races are the biggest annual sports event in the Netherlands and the festival, which takes place over a whole week are visited by more than 200.000 people. In the 1980’s the races were at the top of it’s popularity as Egbert Streuer and Bernard Schnieders became world champions at the sidecar races in 1984, 1985 and 1986. In the 5 years that followed, Streuer always ended in the top 5 with Schnieder and with Geral de Haas as partner.
In 1989 there was a Miss Grand Prix USA chosen in the Hilton in Amsterdam. The winner would be a guest of honor at the Grand Prix races in Laguna Beach USA.
Streuer and Schnieder were among the judges. 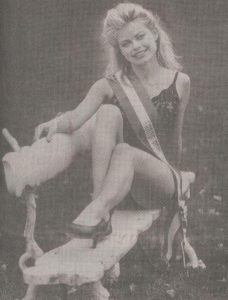 It was Saskia van Marrelo from Haarlem, who was crowned Miss Grand Prix USA. A little bid strange title for a beauty pageant in the Netherlands. Anita Bolt and Muriel Visser became first and second runner-up. One of the other 12 contestants and clearly the favorite of the audience, Hessie Nauta (picture left), did not make the top 3 and was so upset that she left immediately without even attending the after party.
Saskia was an all-rounder in the world of beauty pageants in the Netherlands. She was crowned Miss Beach and became 3rd runner-up at the Miss Holland 1988 pageant. She also represented the Netherlands at some smaller pageants abroad.