Beauty of the Past, Historical, Homepage 09 feb 2018
No comments 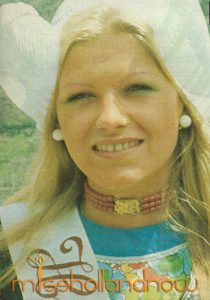 Nanny van der Kuyl represented the Netherlands at some smaller pageants like Miss Teenage Intercontinental (nowadays Miss Intercontinental) 1975. Her sponsor was at that pageant Heineken, she was crowned Miss Heineken……
The national director for Nanny was Yvonne van Wegberg who was the biggest opponent for the official Miss Holland Committee at that time. She was responsible for the dutch candidates for some smaller pageants and started her own Miss Holland in 1974. The winner of that pageant would represent the Netherlands at the unofficial Miss Europa pageant.
In 1976 it was sexy blond bombshell Nanny van der Kuyl who would represent our country at that pageant held in Luna Park de Ricard in Andorra. There were 23 participants. 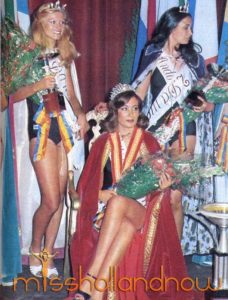 Our Nanny was not unnoticed by the jury, she became first runner-up. Only Miss Spain, Maria Teresa Vale (Miss International) was able to get one place above Nanny and was crowned Miss Europa 1976. Miss Andorra, Nuria Berruezo, was crowned 2nd runner-up and Miss Monaco, Daniëlle Payan was crowned 3th runner-up. Miss Payan was the official Miss Monaco. Miss Norway, Torill Mariann Larsen, who was a top 15 semi-finalist at the Miss World 1974 pageant and 1st runner-up at the 1975 Miss Scandinavia pageant, became “just” 4th runner-up.