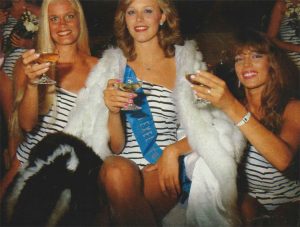 Antionette van Rossum (Miss Holland 1976 and 1978) was born on the island of Texel. It’s one of the small islands in the north of the Netherlands and most of them are really populair amongst tourists.
In 1976 she was Miss Noord-Holland and in 1978 she tried to organize her first national beauty pageant in the Netherlands, the Miss National pageant. We are not sure if this pageant ever took place as we can not find any more information about except that she started to organize it.
But as this is 80’s saturday, we will tell you about a pageant that Antoinette did in fact organize and this one also took place: Miss Texel 1983. 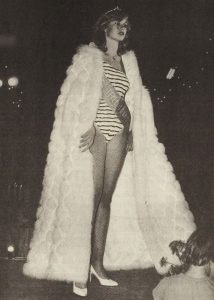 It was for the third time the Miss Texel was organized. In 1981 and 1982 the pageant was organized by another organization in partnership with Panorama magazine. Therefore the whole title of the 1983 edition was Miss Texel Toerist.
Like many local pageants only a few girls, 3 of the 12 girls in this case, are from the place the pageant carries the name of.
The whole show was not a bad one. Several national famous artists came to perform and the prizes were absolutely not bad for a local pageant. One of the main prizes was a fur coat, something thats not appropriate nowadays. Miss Holland 1964 and Miss Europe 1964,
Elly Koot was one of the judges, a real national and local beauty pageant judge in the 80’s. Elly told afterwards that judging was quit difficult but the jury was unanimously in their verdict: 2nd runner-up was Kina Odding, from…. Texel!! 1st runner-up was Nanette Willijns from Wageningen and Miss Texel 1983 became the lovely blond with blue eyes, Karen Lehman. The fur coat she is wearing after her crowning was not the one she could take home, that was a short on……