Beauty of the Past, Historical, Homepage 19 jan 2018
No comments

The trio on the black and white picture is such a beautiful trio, the top 3 of Miss Europe 1980. The pageant was live on television and held in Birmingham, UK.
On the left the lovely the half Greek and half Italian Miss Italy Anna Maria Kanakis, who would also represent her country at the Miss Universe pageant later that year. She was Miss Italy in 1977 and tried to represent Italy at the Miss World pageant but was disqualified as she was only 15 years old. She became a well know actrice in Italy.
From Denmark came Anna Mette Larsen, who won the pageant.
Miss Holland on the right was the beautiful Ingrid Schouten. She would also represent the Netherlands at the Miss Universe pageant and would become a semi-finalist. Ingrid is in fact the youngest sister of the popular dutch comedian Tineke Schouten. She would after her reign life in the USA. 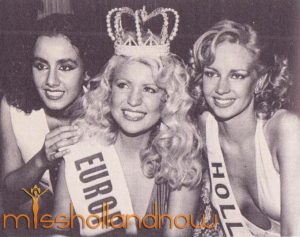