Our new item on Miss Holland Now is the Beauty of the Month. The first beauty is Miss Nederland 1997, Sonja Silva.
Sonja Silva is currently in the news as he has lost over 30 kilo’s after a stomach reduction operation. 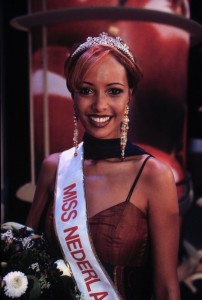 In 1997 the Miss Nederland pageant was a part of the at that time populair television show, De 5 uur show (The 5 o’clock show). Every week there was a preliminary where a jury and the people at home selected provincial beauty queens.
After 4 weeks the 12 lucky girls were selected and Sonja Silva was representing the province of South Holland and made it to the top 6 and eventually she was  crowned Miss Nederland 1997. She went to the Miss World pageant on the Seychelles.
Sonja was at the time of the pageant a backing vocalist of the singer Spiros, who was also her manager. In 2002 she even would get married to him but the wedding was cancelled.

After the pageant she was asked to host some programs for FOX8 but became real popular when she became a vj for former dutch music station TMF. She hosted some shows and also acted in some dutch television series.
She is the only Miss Nederland who posed nude (twice) for Playboy magazine.

Sonja made the headlines having the eating disorder, bulimia and when she was diagnosed having ME/CVS. She gained a lot of weight because of the ME as she had to lay down on bed for most of the times.
Now she is again in the media as she lost over 30 kilo’s after a stomach reduction operation.

It is really good to see her laughing again as she has had a tough life and many times she had to defend herself in the media.