Our second beauty of the month is the lovely and beautiful Miss World Netherlands 2011, Jill de Robles. 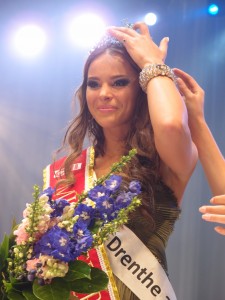 Robin and Stefan of 12 Months of Beauty and Miss Holland Now,  were asked in 2010 to organize the Miss Drenthe 2011 pageant. This was a preliminary for the Miss Nederland 2011 pageant.
In 2011 there was never a girl from this province who had won the title of Miss Holland or Miss Nederland. This all changed in 2011 when Jill de Robles first won Miss Drenthe 2011 and after that the Miss World Nederland title and she represented the Netherlands at the Miss World 2011 pageant. She was together with the other 12 provincial misses and their coaches also the star of the rtl4 television program: “Ik, Miss Nederland”.
Jill is not only beautiful but als a smart woman as she studied at university, cultural anthropology.
Nowadays she makes the headlines as she is in a relation ship with one of the best speed ice skaters of the Netherlands and the world: Kjeld Nuis. He has won many gold medals on a national and international level.
A few weeks ago they announced that Jill is pregnant with their first baby.
Robin and Stefan are still very proud of their “first” beauty queen and wish her all the best of luck for the rest of her life and off course the baby.