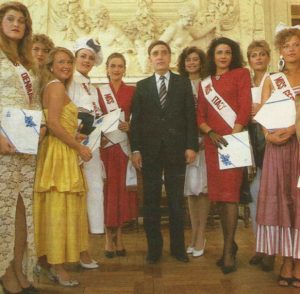 In Reims, France, 12 beautiful women from the European Community got together to participate in the Miss EC (Miss European Community or in French Miss Communauté Européenne ).
Miss Holland at this pageant was the lovely Angelique Tates. Angelique was not the official Miss Holland but had already won some local pageants like : Miss Scheveningen 1986 and Miss Rijnmond. She also participated in two Miss Holland finals (1986 and 1987). At both finals she won the Miss Congeniality award, chosen by her fellow participants.
There were besides 12 girls from every country also 12 members of the jury. The dutch jury was Rob Bartlema, journalist for Panorama magazine. He also brought with him a photographer so he could besides judging the girls also judge the pageant and write an article about it.
From the moment Angelique arrived all the other judges said that Miss Holland had no change of winning as she was to small. The Mother of Angelique was a bid pissed up as they called the organization to ask if it was no problem that Miss Holland measured just 1.64. The organization told them that she should wear some high heels so there would be no problem. But what if all the girls wear high heels? 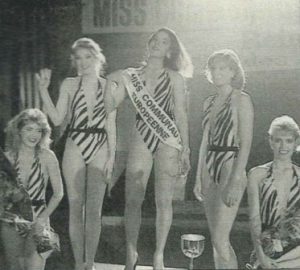 Angelique told the dutch judge that there were no officially crowned beauty queens at this pageant, only runner-ups and winners of smaller pageants. As Rob was completely new in the world of beauty pageants he believed her but there were some national crowned faces at the pageant: Miss Denmark was Zelma Hesselmann, who represented her country at the Miss International and the Miss World pageant in 1987. Lynn Wesenbeek, Miss Belgium, also the official Miss Belgium, also went to Miss World 1987. Miss Portugal was Paula Sousa who also represented her country at the Miss World pageant in 1987. Luxemburg was represented by Martine Pilot, who was Mis Luxemburg in 1986 and went to the Miss Universe and the Miss World pageant that same year.
The pageant was held by Mister Zeiler, who started the official Miss Europe pageant together with Claude Berr and organized also several other pageants like this one.
There were many problems during the 5 days the pageant lasted but in the end there was winner: Barbara Capponi form Italy, she was not the official Miss Italy but participated in the Miss Italy pageant in 1985. Barbara became a television star in her country. Miss Belgium (picture right, standing right of the winner) became the first runner-up
Second runner-up, the favorite of the dutch judge: Miss Denmark (left from the winner. Also in the top 5: Miss Luxemburg (right on the picture) and Miss Spain. According to the article in Panorama, Miss Holland ended last……