Beauty of the Past, Historical, Homepage 23 mrt 2018
No comments 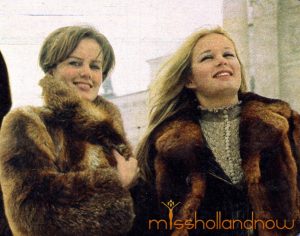 Although the finals of Miss Europe 1977 were held in 1978, the pageant was still called Miss Europe 1977 as it the 1977 pageant was postponed. The finals took place in the capital of Finland: Helsinki. But not in a hall but the pageant was held aboard The Finnjet, the fastest ferryboat in Helsinki at that time.
For the Netherlands the lovely Caroline Hooft participated. Caroline was 2nd runner-up at the Miss Holland 1977 pageant. At that same pageant she was crowned Miss Young Holland and represented the Netherlands at Both the Miss Young International and the Miss Young Intercontinental (nowadays Miss Intercontinental).
At the Miss Europe 1977 pageant she was unfortunately unplaced.
Winner of that pageant was Miss Austria, Eva Düringer, who also represented her country at the Miss Universe 1977 pageant (1st runner-up) and the Miss World 1977 pageant (SF). Eva married in 1980 the famous Italian fashion designer, Roberto Cavalli, who happened to be a judge at the 1977 Miss Universe pageant. 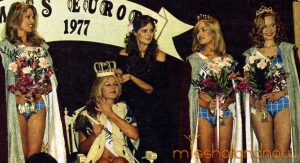 First runner-up was Miss Germany, Dagmar Winkler, also a real veteran in the world of Beauty pageants: Miss Universe 1973, Miss International 1977 ( 1st runner-up) and Miss World 1977 (2nd runner-up). She is nowadays into the politics on a high level in Germany.
To complete the top 3, Miss England, Sara Louise Long als competed in the Miss Universe 1977 pageant.
There were many girls who had represented their country at the Miss Universe pageant, a total of 7 already competed in 1977, one in 1973 and 2 would represent their country in the upcoming Miss Universe pageant of 1978.