Beauty of the Past, Historical, Homepage 24 mrt 2018
No comments 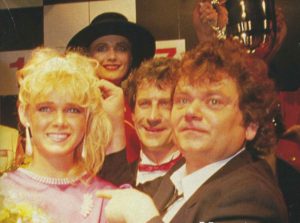 On april 9th 1987, the finals of Miss Amsterdam 1987 took place in Discotheque ” De Bios” at the Leidseplein. A day before the contest a local newspaper published a picture with 3 of the candidates with one holding the trophy that the newly crowned could win. Many suggested that this could probably be the top 3 and that all was already decided.
The organization had to calm everybody down and all 12 finalists entered the pageant.
At that time the Miss Amsterdam pageant was a real important one and the winner would even represent the Netherlands at one of the Miss Europe’s that was organized at that time.
The show would be a big one with the famous Mel and Kim as act during the pageant.
The show started with the popular Amsterdam singer Andre Hazes (on the picture with the winner) who also was a member of the jury. The english hit duo was at that time at the top of their popularity with their songs ” Respectable” and Showing out”. Everything had to be absolutely perfect for the two. 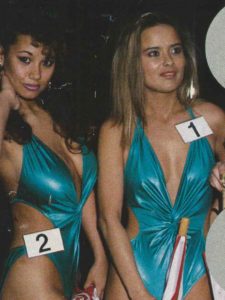 The road manager came before the two would arrive to check if the dressing room was ok. Everything seemed to be alright at that time. Mel and Kim looked very tired when they arrived from their flight from Paris. But when the group came in the dressing room a mysterious box with ice cubes was put on the ground and the ice cubes had started to melt. Result: A puddle of water made the floor quit wet. Mel and Kim were furious and left immediately.
The organization of Miss Amsterdam tried everything to get the two back but they refused. It looked like the girls didn’t really want to perform anymore after their flight.  The people in the audience were not very upset and were happy with the party that concluded the pageant.
Winner of te pageant was the 19 year old Angelique Gouw with Astrid Regina van Es and Amina la Briki in second and third place. Amina was a real pageant girl at that time. She had already participated in several local pageants like Miss Beach and Miss Scheveningen but also in the Miss Holland 1983 pageant.
One of the sponsors was Aktueel magazine and also Miss Aktueel 1987, Brenda van Steenveld (at the picture with number 2) was one of the participants.