Beauty of the Past, Historical, Homepage 05 jan 2018
No comments 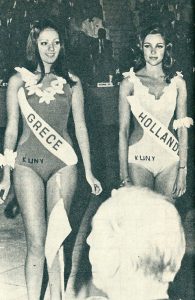 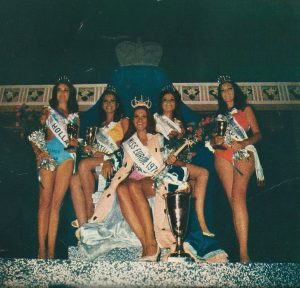 From today we will publish on every friday pictures of our dutch beauties in European pageants.

On the black and white picture we see Miss Greece, Vivi Alexopoulou and Miss, Stephanie Flatow, in front of the judges at the Miss Europe 1970 pageant where both were finalists and became 4th (Vivi) and 3th (Stephanie) runner-up.
The pageant was held in Greece, where at that time a military regime ruled the country. Miss Denmark, Miss Sweden and Miss Norway did not participate as a protest against that military regime.
On the colored picture we see the newly crowned Miss Europe 1970, Noelia Alfonso Cabrera from Spain, who also participated in the Miss Universe 1970 pageant. Her court included, from left to right, Miss Holland, Miss Portugal, Ana Maria Diozo Lucas (Miss Universe 1970 and Miss World 1970), Miss Italy, Anna Zamboni (Miss Universe 1970) and Miss Greece.
Stephanie has been  a very successful beauty queen from the Netherlands. She participated tow time at the Miss Holland pageant, in 1970 and in 1976 and at both she placed as 2nd runner-up.
She was also very successful at the the international pageants where she competed. In 197o she didn’t only place as 3th runner-up at the Miss Europe pageant she also was 1st runner-up at the Miss Benelux pageant.
In 1976 she was 5th runner-up at the Miss World pageant.