Pic of the Week, confrontation at Miss World

Historical, Homepage, Pic of the Week 06 jan 2018
No comments 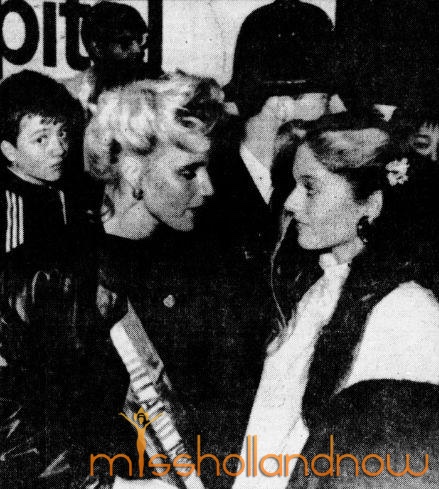 At first an uncomfortable and cold meeting in Londen: the “real” Miss Holland, Pasquale Somers, surprises Brigitte Bergman, the dutch candidate at the Miss World (1985) pageant. Brigitte did not participate in at the Miss Holland pageant and Pasquale believes that not Brigitte but she, as Miss Holland, should be in Londen to represent our country.
For Brigitte it was a big surprise when Pasquale came up to her in front of the palladium, opened up her coat and showed her the Miss Holland sash.

Pasquale Somers was not allowed to go to the Miss World pageant as she had posed nude for a magazine, more about the big Miss Holland 1985 scandal soon on Miss Holland Now