Once you are a beauty queen you will be interviewed by many media. Miss Holland Now will give you the change to read these old interviews here. Don’t forget to read the notes from the website.
The first one is an interview with Miss Holland and Miss Europe 1964: Elly Koot 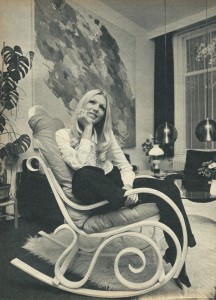 Recently she returned from a four weeks stay in the Mekka of photo- mannequins, New York. With her husband Paul Brandt (then advertising manager at Telegraaf) she has been busy networking with photographers and agencies. In her colorfully decorated apartment in Amsterdam, she announces that she could work there immediately. To really get into the scene, it is necessary to stay there for at least three months, and that didn’t work time-wise due to obligations in the Netherlands. She hopes to return to New York some time, but she cannot say when exactly, because after her succes in Beirut, she is a much sought after model in our continent.

Is this thanks to winning both titles?

„I doubt that strongly. In the Netherlands you absolutely don’t get more work because of that. You can be discovered, but no modeling work is guaranteed. For that you have to be photogenic, and to be a beauty queen, you only have to be beautiful, and have the right sizes. Moreover it is silly to think that after a pageant you are suddenly the most beautiful of the country. You were lucky that on that evening there was no one more beautiful present – that’s all”

Where did she work?

„I did a lot in Germany and Belgium and also in England and Italy. But since last year I only want to work in the Netherlands, because that is well enough for me. I got tired of all the traveling. Sometimes I didn’t even know where I was going to. And I hate hotel rooms. I rather be at home.”

What kind of work does she do?

In the beginning I did a lot of commercial photography. I was asked a lot to do that, because I had a good smile. Then there came a period when smiling on photos was taboo. I then went into fashion, which suits me better, because I can be myself in that. In commercial photography you mostly are an anonymous person. I have done a lot of nice fashion items. The last two to three years I got a good name with fashion photographers.”

How busy is she now?

„I promised myself not to work more than three days a week. I am very old fashioned, doing my own household work and shopping”

How long will she keep on posing?

„I am 25 years old now. Maybe I keep hanging in for another two years. We bought a house in Landsmeer, and that should be ready in that time. Then it becomes time for a baby.”

What did winning both titles did to her?

„Not much good, but no harm. I have became more self conscious. It made me, like every experience, a bit more mature.”

Did it deliver a financial profit?

„No. I was the last Miss Holland, who didn’t get a car. That prize was introduced the year after. If I had taken an agent just after Beirut, I probably had made a lot of money. But I kept on working according to the compass of my own business instinct, and that was wrong sometimes.

What did she most notice at the beauty pageants abroad?

„That pageants are not taken seriously in our country. In Beirut and Nice they are luxurious parties with the upper ten of the cities. Imagine a pageant here in the Netherlands with a city mayor as honorary guest……..”