Once you are a beauty queen you will be interviewed by many media. Miss Holland Now will give you the change to read these old interviews here. Don’t forget to read the notes from the website.
The second one is an interview with Miss Holland 1965: Anja Schuit 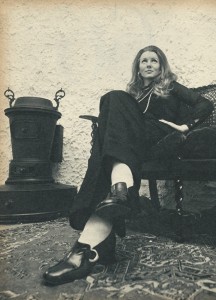 Half of the Netherlands witnessed how Anja Schuit from Arnhem was crowned the most beautiful miss from 1965 in the Show by Rudi Carell named „ 1st of May Show” . Her measurements (90 – 59 – 90) were the ones which tempted the critical eyes from the expert jury the most.

Anja Schuit, busy furnishing her rented flat in Amsterdam, now says: „ The jury was there for nothing. They got the message from the organizer Pim van Leeuwen to choose me as the winner.

He said: „ Because I am the only one who knows out of experience which girl will be successful in an international pageant.” ”

What did Anja think when the results were announced?

„ I am woman enough to be flattered if officially is confirmed that you are a beautiful girl. Winning the title was a very nice experience.”

Wy did she participate?

„ To win the car. I saw the poster in Arnhem on which stood how to enter. At first  I thought is was nonsense, but the more I thought about it, the more I wanted the car. On beforehand i didn’t tell my family. They knew when I was on the TV screen.”

Was the pageant ludicrous?

„ The affaire with the jury was, of course. But if you win the title,it is a good start if you want to work as a mannequin and photographic model. Up to that moment I was a receptionist. Winning the title made everything a lot easier. Photographers are more tempted to ask you for a test shoot, and modeling agencies are willing to give a Miss Holland a good chance. Without the title I would have gotten as much work as I have now, but it would have taken a bit more time.”

Does she have a lot of work?

„ As a mannequin I have a lot of work. In the fashion season, I have some shows every day for three months. I have also worked in Rome for a month and done shows in Belgium, Germany and Norway. But in the last year I have only been active in the Netherlands.”

Also as a photographic model?

„ Yes, I often have photoshoots, mostly for commercials.”

What about her job appeals to her?

„ Its diverse character. You come in touch with lots of people. Besides that I am my own boss. I work independently, take some time off whenever I want to and I do that a lot lately, because I enjoy furnishing my home myself. This wall I plastered myself. Don’t you like it?”

What effected the (still single) Anja the most after the beauty pageant?

„ The fact that people often ask if it isn’t annoying to appear in bathing suit in a pageant.”

What is her answer to that question?