Once you are a beauty queen you will be interviewed by many media. Miss Holland Now will give you the change to read these old interviews here.
The third one is an interview with Miss Holland 1967: Irene van Campenhout

“Well considered these pageants are only a pushover” 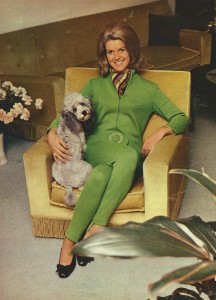 The newspapers praised her in different ways because of her personality. But the 22 year old, from The Hague, but living in Rotterdam, Irene van Campenhout, has to laugh a lot about this.

„In fact I was a silly girl- very shy and quickly nervous. The advantage of this beauty pageant situation for me was that I became more self-conscious. Because of the attention and the traveling, you become more free and audacious.”

Was that the only advantage?
In her mostly with vintage decorated furniture in the newest area in Rotterdam Alexanderstad, Irene pulls her legs on the sofa and thinks deeply.
„What should I say about it? I didn’t expect much of it. was it ok, was is disappointing? I really don’t know. Well considered these pageants are only a pushover. There is a lot of fuss, but what does it represent? It’s all cold commerce. I cannot advise everybody to participate in this. Supposedly being the most beautiful, bores quickly.”

Is the crowning as Miss Holland a guarantee for a lot and well payed work?
„If you make any effort and address everything is a clever way, you can earn a lot as Miss Holland. But after winning the title, you will not be phoned daily for work with which you make make a lot of money. I did some shows and posed a bit. But I did’t make a lot of effort. I am not that ambitious.”

Why did she participate in this pageant?
That I thank to the effort of my sister: she send photos of me to enter the pageant of Miss Zuid Holland. I didn’t dare to participate, but at the day of the pageant I got an invitation by telegram. Then I didn’t have the courage not to show up. I won the title and was automatically entered in the Miss Holland pageant. I became Miss Holland on the day Prince Alexander was born: april 27th 1967.”

Did she already model then?
„I was a receptionist. I was also a vet’s assistant for 2 years, and also telephonist. Being Miss Holland I became a mannequin and photographic model. In the beginning I posed a lot, and now just when I feel like it, and that is not a lot, because I don’t like to sit still for hours, bend over backwards and to smile on command. By the way I don’t do many shows any more. I don’t want to be made up every day, with false lashes and a layer of make up on my face.”

What have been the advantages of the title of a beauty queen?
„ Except for losing my shyness: winning a sportscar and furthermore my travels. At the invitation of the consul I stayed 2 weeks in Portugal. In Nice I participated in the Miss Europa- pageant. I missed the title by half a point. Furthermore I travelled through North and South America, on account of the Miss Universe pageant in Miami Beach. You were hunted down like a cow: come girls, and do this, and after half an hour: come on girls, now that. I lost 5 kilo’s there.”

What did she had to the most fun with as Miss Holland ?
„With the many marriage proposals. This is the only oe I remember: of a postman, he let me know that he found me smooth and sympathetic. He hesitated to write, but he dared to take the step, because he just got a steady job, and he could offer me „some constancy”. Very sweet, is it not?

Irene was asked to become a TV presenter in Belgium.
„But I won’t do it. I don’t like Belgium.”