Once you are a beauty queen you will be interviewed by many media. Miss Holland Now will give you the change to read these old interviews here. Don’t forget to read the notes from the website.
The third one is an interview with Miss Holland 1966: Margo Domen 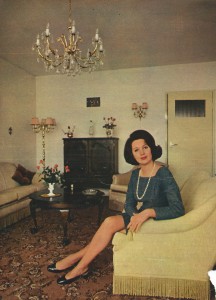 Margo Domen is very proud: six months ago she married Jos Vermeulen, the man with whom she was engaged long before winning the beauty pageant. „Many people predicted something different for us. They tried to scare Jos. He would lose me soon. The engagement with a Miss Holland cannot last long” Jos Vermeulen ( who is a representative in his father’s pressroom) : „ I really just thought that it would end. I was scared we would grow apart, that Margo would have an attitude. But all my doubts were unfounded. Margo stayed the same despite of all the attention. ”The now 27 year old, living in a brand new apartment, Margo Domen from The Hague with her ideal beauty pageant sizes 91-59-91, won on april 25th 1966 her third title: The year before she became the first Miss Bril (Miss Spectacles) from the province of Zuid Holland (She didn’t wear any spectacles) and after that she became the national Miss Bril. „After that my mother made sure she was invited for the Miss Holland pageant.She was more into this than I was. Without telling me she send in pictures of me. I myself wouldn’t have dared. I was too shy.”

Did she count on the title?

„Absolutely not. Not in my dreams.But it suited me right. I already was working as a freelance model. If you get well known, you get more work. I didn’t get much out of it though, because I wasn’t commercial enough. I got more shows and I used my sash to open stores and got jobs as hostess in several shows.”

So for her a beauty pageant is no nonsense?

„Nonsense…. oh but you shouldn’t make it too heavy. For me it was important. With all the travelling and meeting people , I got a lot wiser. I also won a car, but I sold it, because I didn’t have a driver’s license.”

Will she encourage other girls to participate in these pageants?

Yes, but they have to stand firm. Well regarded a beauty pageant can be a dangerous adventure. A lot can change. You are surrounded all the time by attentive men, yo get lots of invitations to parties and also marriage proposals. I saw a lot of girls get hurt.”

Does she have good memories?

„I only have good memories. In Nice I had a great time: At the miss Europe pageant I enden eight. I didn’t place in America. But I opened a dance with Pat Boone and danced with Cassius Clay. But I was happy that I returned after a month from America. You are just like a prisoner. There always is a chaperone who even sleeps in your room. And you may not even pick up the phone.”

Does she still work?

„I still do fashion shows once in a while, because I enjoy it. I hope that I can still do that for some time, because as a housewife it brings some change.”

Is she only a mannequin?

„And sometimes hostess at a fair. I never worked as a photographic model, because i think posing is very difficult.”