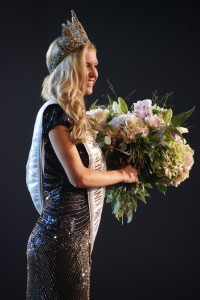 For the second year in a row the finals of Miss Nederland took place in Studio 21 in Hilversum, where in one week the new dinner show Pandora will have its premiere. The show was hosted by the always beautiful Kim Kötter and the stunning musical star Carolina Dijkhuizen. Carolina did not only a great job presenting but also gave two powerful performances.
The 12 beautiful girls came on stage in lovely white suits riding a bicycle. In the same suits the girls presented themselves. The second part of the competition was the talent-show. All 12  showed their talent to the audience and the jury. We saw several dances and heard some singing but there was also a DJ act and Floor had a monologue.

There were not only beautiful girls on stage but also some cute dogs, who were presented to the audience and could be adopted for Stichting Hulphond Nederland (a foundation who trains dogs to help disabled people). One of the dogs will be named after the new Miss Nederland.

The next three rounds were beachwear, cocktail-wear and evening-wear. We have to say the girls looked great in all rounds and we could imagine that the jury had a hard time choosing the new Miss Nederland. 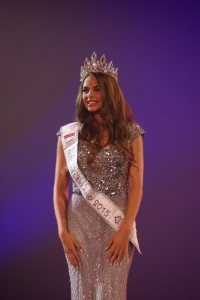 After all the rounds the jury had to decide who would be the runner-up and the new Miss Nederland. Before the top 3 were announced the special awards were handed out by Mister Nederland 2012, Bas Gosewich.

Before Miss Nederland 2015 was announced they called out the top 3: Janike Altena, Jessie Jazz Vuijk and Margot Hanekamp.

And now the climax of the evening, who is Miss Nederland 2015…..

We wish the new Miss Nederland, Jessie Jazz, all the bes of luck and we will follow her on her journey.