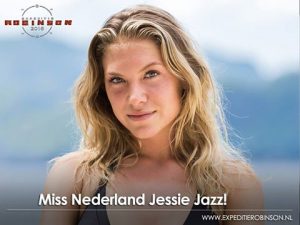 Miss Nederland 2016, Jessie Jazz Vuijk, will be in Expeditie Robinson 2016. This reality show on RTL5, is about 16 person who are dropped on a deserted island and have to survive.
There are of course eliminations rounds where the participants have to write down the name of that person that they want to leave the island.  At first is was a belgian/dutch co-production. It all has to do with tricks, pacts and untrustworthiness. Who can you trust and who not?

The show will be aired from september 8th on RTL 5

Jessie Jazz is not the first beauty queen who participates in this television program. Here is list of the beauty queens (and models from competitions) who also participated: