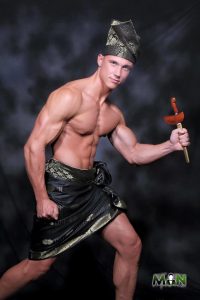 Tim Bertrams, who represented the Netherlands at the first ever held, Man of the Year beauty pageant did a great job by becoming second runner up.
This new male pageant was held in the beautiful city of Pekanbaru on the island of Sumatra Indonesia.
Tim impressed the jury and the audience with his fresh looks, great posture and his personality. Tim, who is a newcomer in the world of male pageants, was asked by Robin and Stefan of 12 Months of Beauty to become Man of the Year Netherlands 2016 and represent the Netherlands.
Man of the Year Philippines, Karan Singhdol, won the pageant and Man of the Year Lebanon, Tarek Moaykel, became 1st runner-up.

on the picture above, we see Karan with his court and Pawee Ventura from Missosology, who was a member of the jury. On the picture right, we see Tim in a typical Indonesian wear.