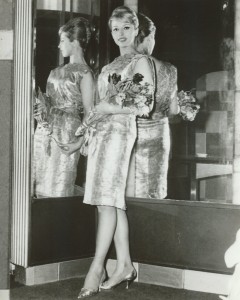 A BEAUTY-PAGEANT IS AN INDUSTRY

22 year old Juno Onink, one of the 4 Miss Hollands who were chosen this year, wrote her tale for Tienkamp, about the past weeks, which she mainly spent in airplanes, hotel-bars and of course on the catwalk, where she strolled before a strictly watching eye of a number of members of jury in bathing suit and evening gown.
She experienced the pageant, often subject to sharp criticism, as a candidate. So she knows everything about that.

Amsterdam, Saturday.
I always considered beautypageants the utmost nonsense and I would never consider giving up my job at the office and participate in one, if I wouldn’t gain anything from it.
It always was my intention to become a mannequin, and by becoming Miss Holland, you can reach this goal quicker.

INDUSTRY
On the long run it is easier. You know it is not you yourself walking there, but you are part of an industry called beautypageants.
I became Miss Holland and that opened many doors. Travelling far away, proposals for fashion shows, and thereby the possibility to earn some money.
My chaperone and I travelled by airplane to Rome. There we met the other beautyqueens from other countries, who also were travelling with their chaperones to the Miss Europe pageant in Beirut.
The first afternoon in Rome we spent in the lobby of the hotel, sitting, hanging aroud and giving out autographs to admirers. Boredom, heat and exhaustion is what I will always remember about that afternoon.
I hardly was in contact with the other girls. The understanding between was not very good. There was no cordiality. Every girl saw rivals in the other girls, and none would admit that another girl was also beautiful. I was a bit closer to Miss Germany, my roommate.
In Rome there were of course excursions, trips and speeches by several mayors and others. On saturday evening we all went out, but even then there still was no better understanding.
We all had our own new Fiat with chauffeur. It was a nice view when we were driving through th centre of Rome: 18 of the same cars in a row. 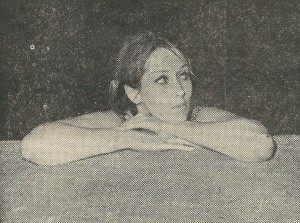 HEAT
Then we travelled by airplane to Beirut. There was fatigue and even more heat again.
There was no leisure time. The picture with this story where I was leaning on the edge of the swimming pool of the hotel, was taken at 02:00 AM. During the day there was no time for swimming.
One official event followed the other. There were excursions which I would had enjoyed, wasn’t it because of the heat. Miss Norway fell ill because of the heat.
One afternoon Miss Germany and I reported ill, so we would at least have a few hours to ourselves.

Cheek-to-cheek
The evenings begore the actual Miss Europe pageant, we spent with our chaperones. A kind of obligatory going out, as all the chaperones were members of the jury. Your attitude towards them obviously would be of influence of the results of the pageant. But I did’t feel like dancing cheek to cheek with strange men. Fortunately I had a lot of support of my own chaperone who acted very properly. From the above we can conclude that beautypageants shouldn’t be taken very seriously. There were no scandals, I didn’t notice anything, but Miss Holland is for sure not the most beautiful girl from our country and Miss Europe not the one from our continent.
It is a business and that’s why it’s incorrect to criticize participation. Every girl entering does so to gain something out of her participation. After Beirut I could have gone to Cairo, but I went back to Amsterdam. I felt homesick to my boyfriend and I was exhausted.

This month I will go to America.one week to New York, 3 days Washington and then the pageant in Miami. I don’t really feel like it, but I heard that it is less official.