In the world we live in we have to deal a lot with anger, violence and war. Beauty pageants mostly show that it can be different.

After the end of World War II, in the Netherlands we remember those who died in a war on May 4th. On May 5th we celebrate our our freedom, one of the most important treasures in our country.
But why May 4th and 5th?
On May 5th 1945, the germans surrendered after they had occupied the Netherlands in 1940.
On May 4th at 20:00 hours we are silent for 2 minutes to commemorate and after that we hoist the flag to the top and it is time to celebrate the freedom we live in.

We from Miss Holland Now would also like to remember how important freedom is and how cruel war can be, by telling the story of the life of Miss Holland 1931, Mary Lelyveld…. 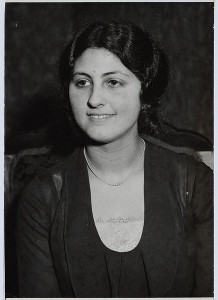 Marie van Lelyveld was just 18 years old and a student, when she won the Miss Holland 1931 title.
Because she was only 18 years old, many newspapers said she was just a girl, not a beauty queen; they also called beauty pageants and queens disgusting and disgraceful. In spite of the bad publicity, it didn’t stop Marie to go to the Miss Europe 1931 pageant in Paris. The pageant was held in the opera house and de participants had to walk on a floating bridge. For the first time the organization allowed press to be present at the judging. It was very odd that the dutch press was very negative about the pageant and Miss Holland, but there was a large press delegation present from Holland. After their jaunt to Paris they kept on writing badly about beauty pageants.
The press at the pageant thought that Mary Lelyveld was to dark to represent Holland, and her dress made her seem too old, therefor she didn’t place.
After she returned from Paris, she was not welcome at school to finish her study, as the board of the school didn’t allow her to go to the pageant: they looked at it as if she had deserted. After Mary Lelyveld became Miss Holland 1931, the school director already indicated that he wasn’t happy with her winning the title. This was also something the press could write about.
Afterwards she got married and started happy family life. But soon dark clouds gathered in the life of Mary. In May 1940 the germans occupied the Netherlands and started their jew baiting in our country. We know that the life for a jewish family, like the one from Mary, during World War II, was getting from bad to worse. After Mary’s family was deported to Sobibor, it was in June 1943 that she was first brought to Kamp Westerbork, and on July 20th she was put on a train to Sobibor together with her husband, son, sister and brother in law. After a journey which probably lasted for 3 days, they arrived at Sobibor and were probably gassed immediately……

This year we celebrate 70 years of freedom in the Netherlands.
We are proud that after such a long time young people like Francis Everduim, Miss Grand Netherlands 2014, didn’t forget the meaning of this commemoration.
In her introduction film for Miss Grand International 2014, Francis told the world about May 4th and May 5th and what these days mean to the dutch people. In the Netherlands freedom is something obvious nowadays but for many people in the world it is not.
We would like that stories like the one of Mary Lelyveld will never occur again, but that will be a utopia…