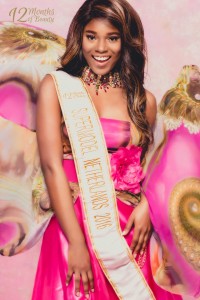 It was a great evening in Delhi, India for Supermodel Netherlands 2016, Leila Aigbedion. After 1,5 week of preparing in India she did not only made the top 15 but she also won the Miss Talent award. This award is given to the girl who overall made the most impression on the organization and the people of India. Leila was very populair among the organization as she was asked several times to appear for television and gave her opinion on women’s rights.
For Leila is was her second international pageant where she had the honor to represent the Netherlands. In 2013 she already went to Belarus for the Miss Supranational pageant. It was again 12 Months of Beauty that prepared Leila and gave her the opportunity to go to this competition.
It was for the second time the Netherlands was represented at this great competition.
Supermodel International 2016 was won by the lovely and very friendly Miss Malaysia, Josephine Tan.