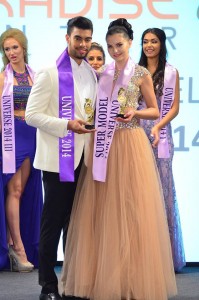 The pageant “Super Model Universe” was created with the idea to present new models for the world podium and its best modeling agencies. Our National Directors also keep their right of being a hireing agency and they sign an advertisement agreement with the organizers for their models. The pageant will be held in the form of runway shows in the span of 3 days in Paradise Center. (This info is from their Facebook)

The male winner from last year was Kyle Coopman from South Africa. (on the picture right: Olivia and Kyle, the two winners from last year)