As a great colleague of Miss Holland Now and as one of the judges of MHN50, Melissa Peusens, from Miss Nederland Support, gave us the second nominee for our MHN50. 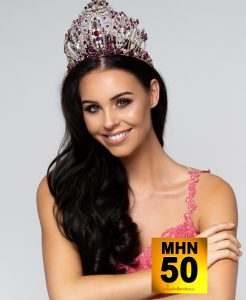 My second nominee for the MHN50 is no stranger in the (inter)national pageant world. It is former Miss Progress International Netherlands Kelly van den Dungen. In 2016 she also was in the finals of Miss Nederland. Kelly was in a good position in all hot picks and in the end she was crowned second runner up in a swirling show. She also entered Miss World Netherlands 2016, where she stayed unplaced.

Fortunately, Kelly didn’t stop and tried her luck at the organization of 12 Months of Beauty.
In 2017 she participated in the dutch finale of Miss Grand International 2017. Driven like always, she was in my personal Top 2 together with Melissa Oeges, and her dream came true when she was crowned Miss Grand Netherlands 2017. Finally she got the chance to represent the Netherlands at a large international pageant. Once again Kelly was sky high in the international hot picks. In the preliminaries and also in the final show, she met to all expectations and reached the top 20. A great accomplishment!

Still Kelly was ambitious as ever and also by the trust she got from her team (12 Months of Beauty), since a short time, Kelly can call herself Miss Supranational Netherlands 2018. She holds on to this fantastic chance with both hands. On december 7th, also the 10th anniversary of Miss Supranational, she will represent our country. I have all the faith in her!