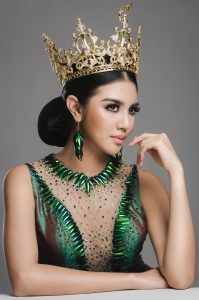 Miss Grand International 2016, Ariska Putri Pertiwi, will visit the Netherlands next week from may 1st till may 6th.
At first, Robin and Stefan from 12 Months of Beauty, invited her to attend the finals of Miss Grand Netherlands 2017 las month. But due to some visa problems se was unable to travel to Europe.
Because of many disappointed people in the Netherlands Robin and Stefan decided to invite for a visit during the first week of may.
This week is in the Netherlands a week of remembrance and celebration. On may the 4th, the people of the Netherlands remember all those who have died during a war somewhere in the world. The remember them by being silence for 2 minutes at 8 o’clock. Miss Grand International 2016 will attend one of the official remembrances in Amsterdam and after that she will go to a 4th of may concert in te Concert building in Amsterdam. This hall has one of the best acoustic in the world.
On may the 5th, there are celebrations every where in the Netherlands. On that day we celebrate the freedom we life in.
Ariska will visit one of the celebrations in Amsterdam in the Westerpark, named: the Fee West.
There will also be a meet and greet on may 2nd with the Indonesian community in the Netherlands at a event with fashion and music.

Robin and Stefan are very proud that they were able to arrange everything in a very short notice.