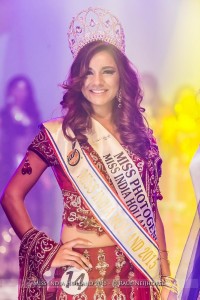 On sunday march 15th another sizzling final of the Miss India Holland pageant took place in a sold out Royal Villa Thalia in Rotterdam. 21 year old Shaïsta Thakoersing from Bosch en Duin won the title and was officially appointed as Ambassador of the Miss India Holland Organisation by head sponsor of the event, director of I AM SUPERJUICE, Firoz Moendir. In April, Shaïsta will travel to the beautiful Far East to represent the Netherlands during the Indian Princess International 2015 pageant in India.
After winning the world title Indian Princess International 2014 by previous dutch winner Nadine Makhanlal, the Miss India Holland Organisation had a big challenge. They organized a pageant in which the cultural identity was enclosed in the fairytale atmosphere of fashion in Bollywood, in which they crowned a worthy successor, Shaïsta Thakoersingh!

There was a lot of tension that sunday evening in the Royal Villa Thalia in Rotterdam. The jury consisting of 6 members, among which Arjun, the international artist, and Michael Glenn, Mister International Netherlands 2014, had a difficult task. 18 gorgeous candidates, fighting for one coveted title. Chairman of the jury, notary Mrs Lont, proudly handed out the golden envelope with the redeeming answer to the wonderful hosts of the evening: Wynand Thakoer, finalist for Mister International Netherlands 2015 and Safina Barsatie, Miss Asia Pacific World 2014

The fantastically dressed audience had already made reservations for the evening, long in advance. In the elegant location with a 360 degree projection was a diverse audience with highly placed notaries, entrepreneurs, and family and friends of the participants. Thus the ladies were encouraged enthusiastically. Meanwhile the senses were stimulated by an outstanding 4 course meal, prepared under supervision of 2 star chef François Geurds, and the guests enjoyed the live acts supplied by Entertainment Studio, Michael Chitoe, Bolly Sensation and Jennifer Bhagwandin as brand manager of I AM SUPER JUICE.

The brain behind this organization in a new concept is the Miss India Holland organization, with their mission to bring dutch girls with an Indian background into the picture. Their most important goal is to position nationally and internationally the strength of indian women in the Netherlands, in the slogan: „Dream. Believe. Achieve.”

Besides the head title, the other titles issued were: